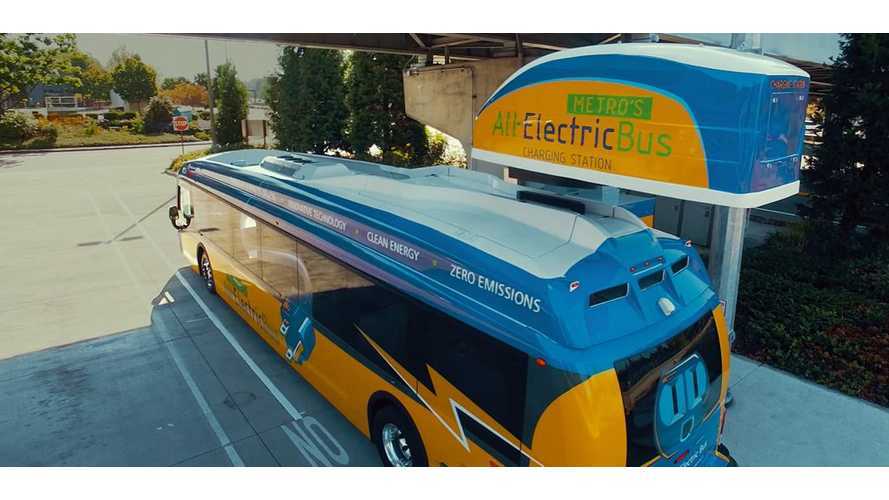 Proterra has raised $140 million in a Series 5 round to fund it upcoming "high-growth phase". In about a year electric bus maker could even go public.

Several months ago, the company announced its latest electric bus, the E2 Catalyst with a massive 660 kWh battery on board and 350+ miles of real world range.

"Proterra partnered with J.P. Morgan to close the equity funding, which was led by $40 million from an undisclosed investor, an additional $60 million from several new investors, and joined by existing board level investors Tao Capital Partners, Kleiner Perkins, GM Ventures, Constellation Technology Ventures, 88 Green Ventures, Edison Energy, Inc. and others. This growth equity financing signals an accelerated manufacturing phase for Proterra, as the company doubles production to meet growing customer demand across the United States."

The company intends to increase its production capacity on both coasts:

"With $140 million of new capital, Proterra will dramatically accelerate production capacity on both coasts, while continuing to develop its next generation of heavy-duty electric vehicle products. Proterra aims to increase production in its East Coast facility, located in Greenville, South Carolina, by 300 percent and initiate production in its City of Industry facility in Los Angeles County. Combined, the facilities will more efficiently serve customers around the U.S. Proterra will hire key personnel in Los Angeles, Silicon Valley, and Greenville to support production growth, as well as implement new manufacturing equipment and systems."

According to Bloomberg article, the current round of funding was also the last one before the company will launch its IPO in late 2017 or in 2018.

“The size of the round and the diversity of our investors reflects what we’re seeing around the world as institutions and businesses divest from fossil fuels. We thank our existing investors for their support and welcome our new investors as we continue to deliver on the promise of a cleaner future for all communities.”

JLL in Chicago made history in fall 2016 by debuting America's first all-electric corporate shuttle bus fleet. Clad in nautical themed designs, the ten Proterra buses operate between Chicago’s commuter train stations and two of the city’s tallest buildings, the iconic Prudential Plaza and Aon Center, both of which are managed by JLL. This zero-emission, corporate fleet also marks a notable step toward Chicago achieving its goal of reducing greenhouse gas emissions 80 percent below 1990 levels by 2050.

The University of Montana Transitions to Clean, Quiet Transit with Proterra

Associated Students University of Montana’s Office of Transportation (ASUM), one of a select few student-run transit agencies in the U.S., is undertaking a substantial and important step in the history of transportation. By launching two all-electric Proterra vehicles, with this deployment, UM becomes the first campus in the nation to operate zero-emission vehicles in its transit fleet. This move allows ASUM to support University of Montana goals for net-zero carbon emissions, City and County standards for air quality, campus and neighborhoods efforts toward noise reduction, and stewardship of UM student fees through overall cost-reduction in transportation services.The launch boldly seeks to meet aspirations for cleaner air, more sustainable methods of transit, and deployment of superior technology to serve basic transit necessity around the community of Missoula.