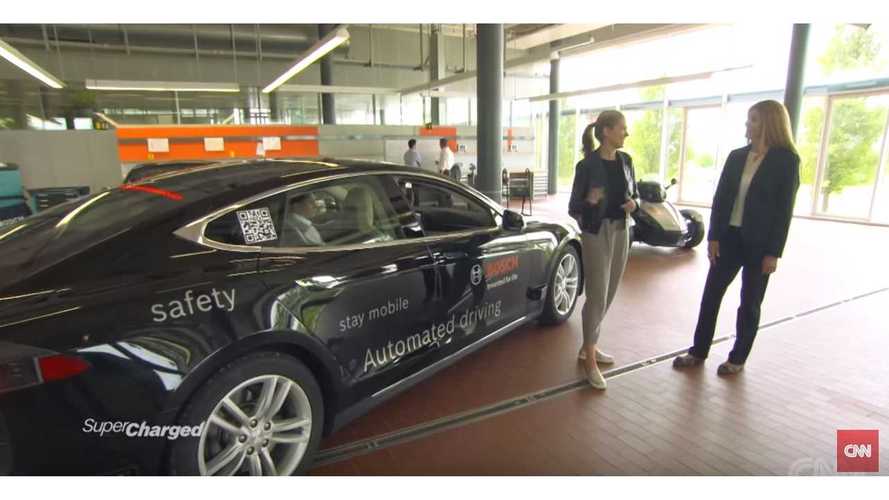 Bosch is the world's number one automotive parts supplier. The company is working on an autonomous driving system of its own, and Tesla, Audi, Google, and other companies are customers. CNN had an opportunity to test drive a Tesla Model S complete with Bosch Autonomous Driving Sensors.

Test Drive Of The Tesla Model S Retrofitted By Bosch

The vehicle prototype maintains a high level of autonomy and is an example of future cars meant to completely replace human drivers. Six sensors were installed around the Model S. Aside from the sensors are radars on the front and rear of the vehicle for sensing longer range and detecting objects. Bosch added an additional touchscreen in the car to view road conditions via the sensors and to control them. Overall, 50 components were installed in each of the two Model S sedans.

The test drive was performed in Germany on the infamous Autobahn. Speeds of 75 mph were reached with no driver intervention. Bosch anticipates driverless vehicles to be on public roads by 2020. This is on target with most recent forecasts. Maria Belen Aranda Colas, Bosch autonomous driving project manager, said the company's primary goals are to "increase efficiency and safety on the road".

Bosch's sales for self-driving systems are growing rapidly. The company currently employs over 2,000 engineers between Abstatt, Germany and Palo Alto, California. This is only the start for Bosch as job openings are posted on its website for positions related to autonomous driving R&D.