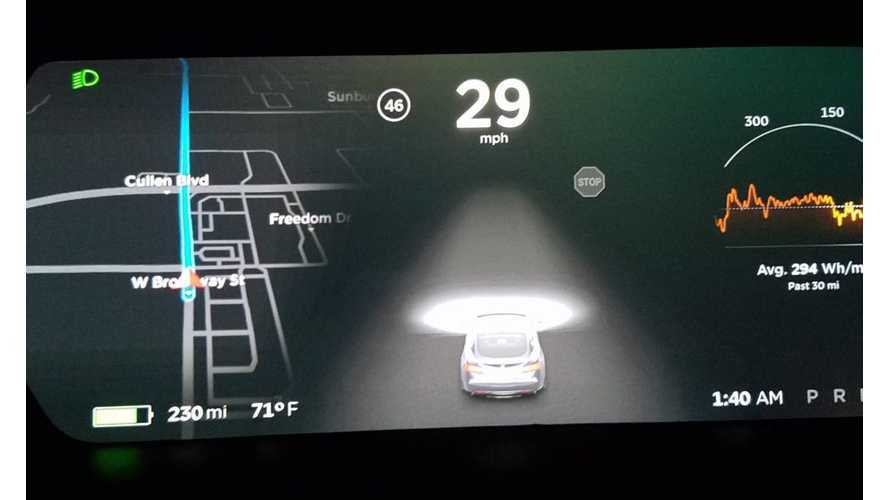 The select 1,000 or so Tesla owners that received the most recent Autopilot 2.0 software update are reporting that various levels of increased functionality are coming to their vehicles slowly over time.

The first reported change was the ability for the vehicle to detect, but not respond to, stop signs.

"A Tesla owner that was part of the first batch of 1,000 recipients of Enhanced Autopilot posted a photo showing a stop sign appearing on the main instrument cluster of their Model S. The image is significant in that it’s the first time we’re seeing indications that Tesla is advancing towards full autonomy."

Soon, these vehicles should be able to detect and respond to stop signs, traffic lights and more as calibration of the system occurs over time.

More recently, another change was reported (with video evidence) by Tesla owner Gary. According to Gary, calibration of Autopilot is constant in his Tesla:

“I could tell the vehicle was calibrating because a yellow error message would appear informing me that my cameras were still calibrating whenever I tried to engage the traffic aware cruise control.”

“...after driving only 20 miles total in 3 trips, the cruise control feature started to work.”

Other features are reportedly coming online too, such as the highly anticipated "Low-Speed Autosteer (Beta)." Gary says it took a few days for this feature to begin to operate at a reduced level of functionality.

This calibration to which Gary refers is something Tesla likes to call operating in "Shadow Mode." The various features are learning in the background and, over time, get introduced into the vehicle.