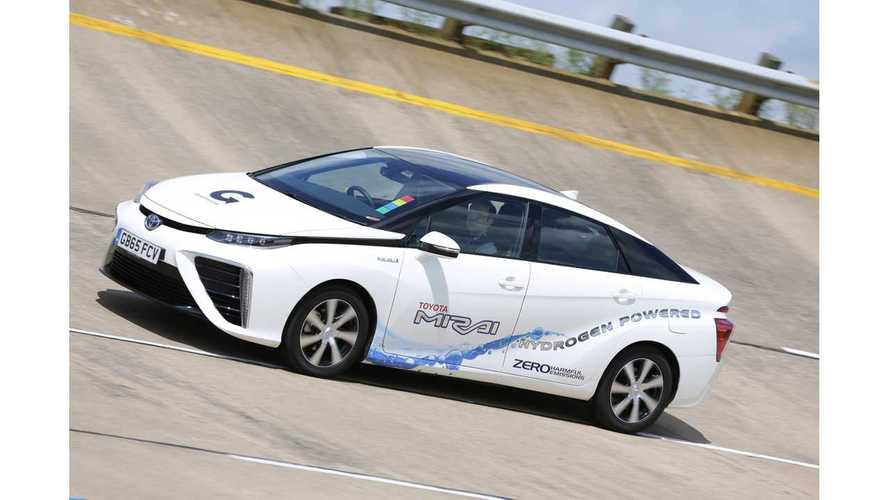 As of May 2016, Toyota reached the milestone of 250 Mirai fuel cell cars sold in the U.S.  The Mirai first debuted in America in October of 2015.   The highs of the plug-in electric monthly scorecard this is not.

Since its launch, the Mirai has averaged ~31 sales per month, while peak sales (41 units) were reported in both March and April.  This past month (May) 'almost' made it three consecutive months at the high, but fell just short at 40 cars moved.

With these results in hand, Toyota's trailblazers (what the company calls its FCV owners) overtook "the first mass-produced fuel cell vehicle in the U.S. market" - the Hyundai Tucson Fuel Cell.  Heading into May, just over 100 hydrogen Hyundais were sold in total.

Hydrogen fuel cell cars are often called electric cars due their electric drivetrain, powered by the fuel cell, although those are not plug-ins  (they could be of course, if someone would add the charging capability and expand the on-board battery).  The Toyota Mirai and Honda Clarity Fuel Cell are both capable of exporting power through a CHAdeMO outlet (no word about charging).

Refueling of the Toyota Mirai in the US is possible at one of the relatively rare/specialized hydrogen fuel stations found mostly in California (less than 20 retail units were operation in the state in Q1).