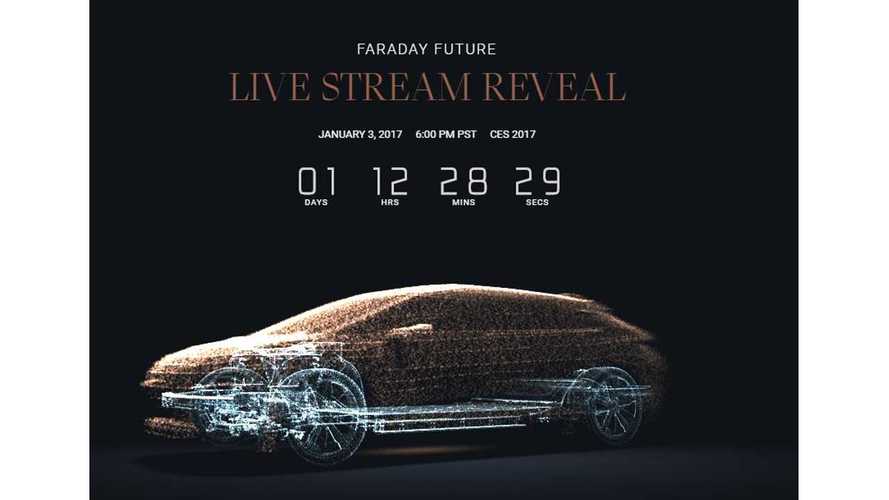 The big Faraday Future reveal event is set for tomorrow (January 3) at 6 PM PST (9 PM EST) at The Pavilions located at the World Market Center convention space in Las Vegas.

The reveal comes before the official opening of CES 2017 and we'll be on hand live for the event to bring you details straight from the scene; and as we do with most major EV events, one can watch the live-stream of the debut here beginning shortly before 6PM (PT).

Prior to the reveal, Faraday Future has released yet one more teaser...a brief video again.

Faraday will livestream the reveal on its website here.

From the video above and from previously leaked info, it's believed that Faraday will show off more than one vehicle. It could be that Faraday shows off several body styles, all with the same underpinnings. Or perhaps several completely different models will be shown (doubtful).

We've also learned that Faraday has an outside area set up in which it intends to showcase the vehicles on a closed course, as the company has told us to "...please dress warmly as this event will take place both indoors and outdoors."  Temperature are expected to be around 50°F in the evening.

Despite its recent struggles, we're still hopeful that Faraday can pull off tomorrow's event without a hitch and that the automaker remains afloat so that it can bring the vehicle(s) shown tomorrow to life in the near future.
++