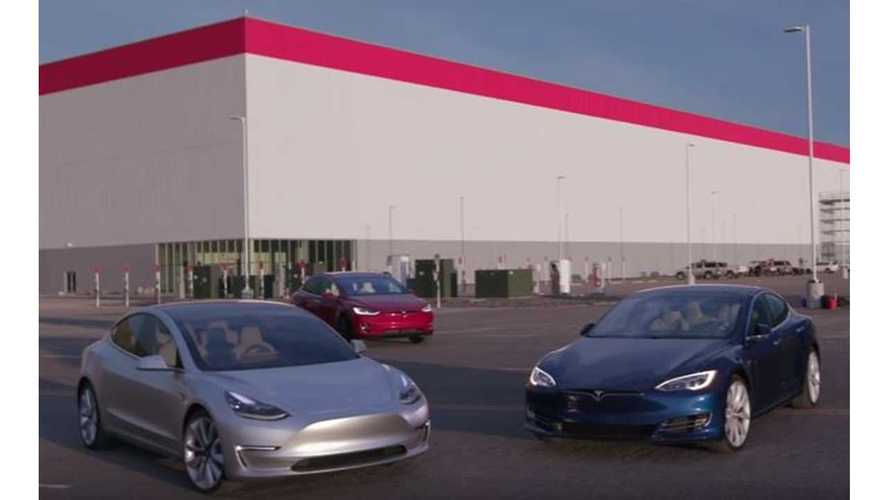 A highlight of Tuesday's Annual Tesla Shareholder Meeting was another new announcement by CEO Elon Musk that the planned battery output of the Gigafactory could be tripled. This would amount to around 105 GWh of cells and 150 GWh of battery packs annually. This is also over triple the current worldwide lithium-ion battery production.

Elon Musk And J.B. Straubel Speaking At The 2016 Annual Tesla Shareholder Meeting On Tuesday, May 31

Realize that this is projected based on just the 13 million square foot Gigafactory's initial plans. It has been said that there will be future expansion as well, which could up numbers even further. Also, the "Gigafactory 1" as it's being called, may only be the first of other battery production ventures by Tesla.

As previously reported, Panasonic is Tesla's Gigafactory partner. Musk also announced that Panasonic is intending to build a brand new 20700 cell format. The current format is 18650 cells. This will make for taller, wider, and more powerful battery cells than those in the Model S and X of today.

Musk also retorted an earlier statement. He had said publicly that the Gigafactory would run 2/3 of production towards Tesla vehicle battery packs and the other 1/3 for Tesla Energy storage products like the Powerwall and Powerpacks. Now he is claiming an approximate 50/50 split. Musk believes that in the big picture, for longer term, Tesla Energy will create revenue equal to the company's vehicle line.

This may seem a bit skewed due to the announcement of the increase in upping to 150 GWh annually coupled with the present situation of filling almost 400,000 Model 3 orders in the next few years. Musk tends to change his mind frequently in terms of "big" news and projections.

Cell production will begin later this year according to both J.B. Straubel and Musk. Musk assured that Panasonic has shown "impressive machines" and can produce “by far be the best cell production in the world”.

The entire Tesla Shareholder Meeting is available below, with much more information for those that would like to watch.