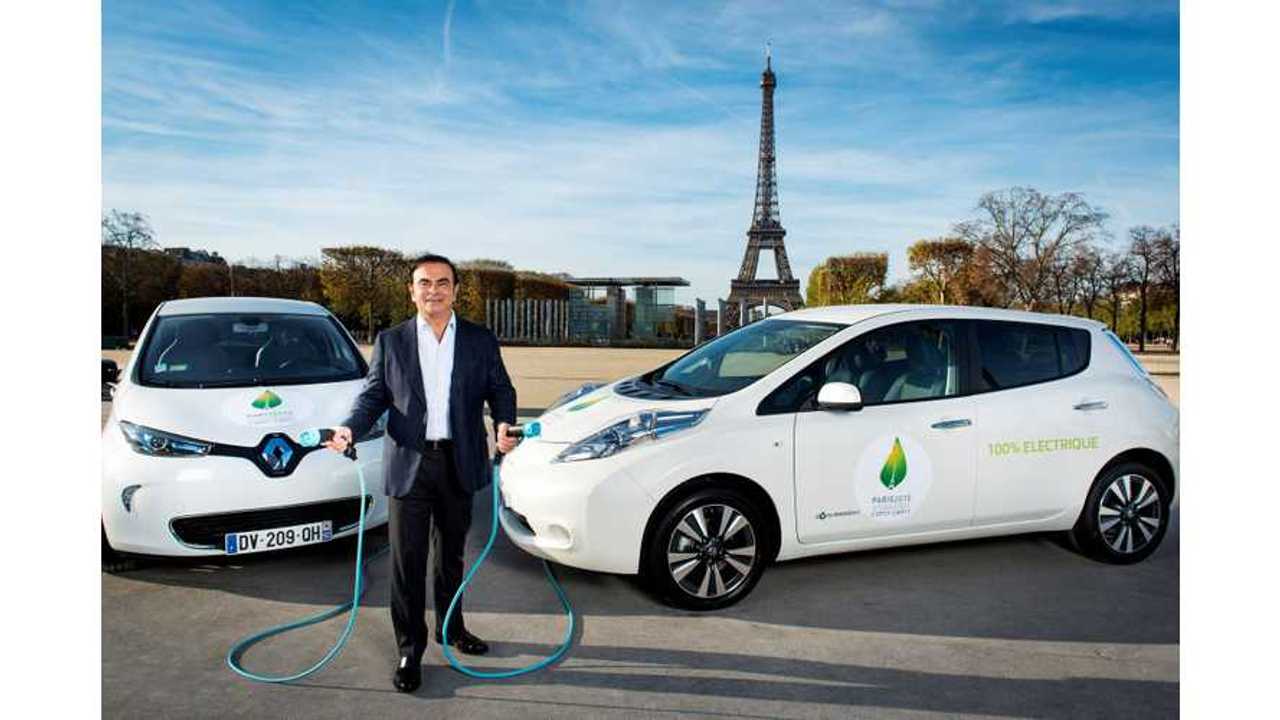 Nissan LEAFs and the e-NV200

No other automotive group has delivered near as many all-electric vehicles ever (or even 150,000), and it doesn't appear as if the Renault-Nissan Alliance is slowing down any time soon, having recently sold more than 100,000 EVs in 12 months for the first time ever this August.

"The Renault-Nissan Alliance, the world's leader in zero-emissions mobility, has sold its 350,000th electric vehicle since December 2010 when the Nissan LEAF went on sale.

The Alliance achieved the historic milestone in August, while also setting an industry record of 100,000 EVs sold in a single year.

The Alliance today accounts for half of the EVs sold worldwide. The Nissan LEAF remains the industry's best-selling EV ever, with more than 230,000 units sold globally. Renault is the best-performing EV brand in Europe."

"This historic milestone confirms our customers' recognition of the benefits of Renault and Nissan electric vehicles. Our commitment to contribute toward a zero-emissions world by bringing to the market a full range of affordable EVs makes Renault-Nissan the indisputable leader in EV technology."

Historic milestones for Nissan and Renault

The Renault-Nissan Alliance is the only global car group with a wide range of zero-emission vehicles for personal and business use. In addition to the LEAF, Nissan also sells the e-NV200, a light commercial vehicle sold mainly in Europe and Japan since 2014. Along with the ZOE, Renault also sells the Renault Kangoo Z.E van, the SM3 Z.E. sedan and the Twizy, a two-seat, urban commuter vehicle.

Renault reached the 100,000 EV milestone worldwide since its first model, the Kangoo Z.E., went on sale in October 2011. The milestone was marked with a ceremony in Norway, where a customer took delivery of a Renault ZOE. ZOE is the best-selling EV in Europe, and, with sales increasing 32 percent during this first six months of this year, Renault is the best-performing EV brand in Europe: One of four electric vehicles on European roads are Renault.

The Alliance keeps improving the range and features of its EV fleet, pushing the boundaries of what is possible with zero-emissions technology to meet customer expectations and needs.

Nissan launched the updated Nissan LEAF with 250 kilometers of range2 in the United States and Japan in late 2015, and in Europe earlier this year.

The Alliance continues to innovate by combining its EV expertise with the research and development of other advanced technologies. In January, the Alliance announced plans to launch more than 10 vehicles with autonomous drive technology by 2020. The technology will be installed on mainstream, mass-market cars at affordable prices, confirming the Alliance's commitment to achieve its twin goals of zero-emissions and zero-fatalities.

1 Total figures based on Nissan's Global Data Center (GDC) as of August 2016. The distance and the amount of CO2 are only collected from those Nissan LEAF EVs registered in the telematics system, which account for approximately 53% of total global sales (average projection).