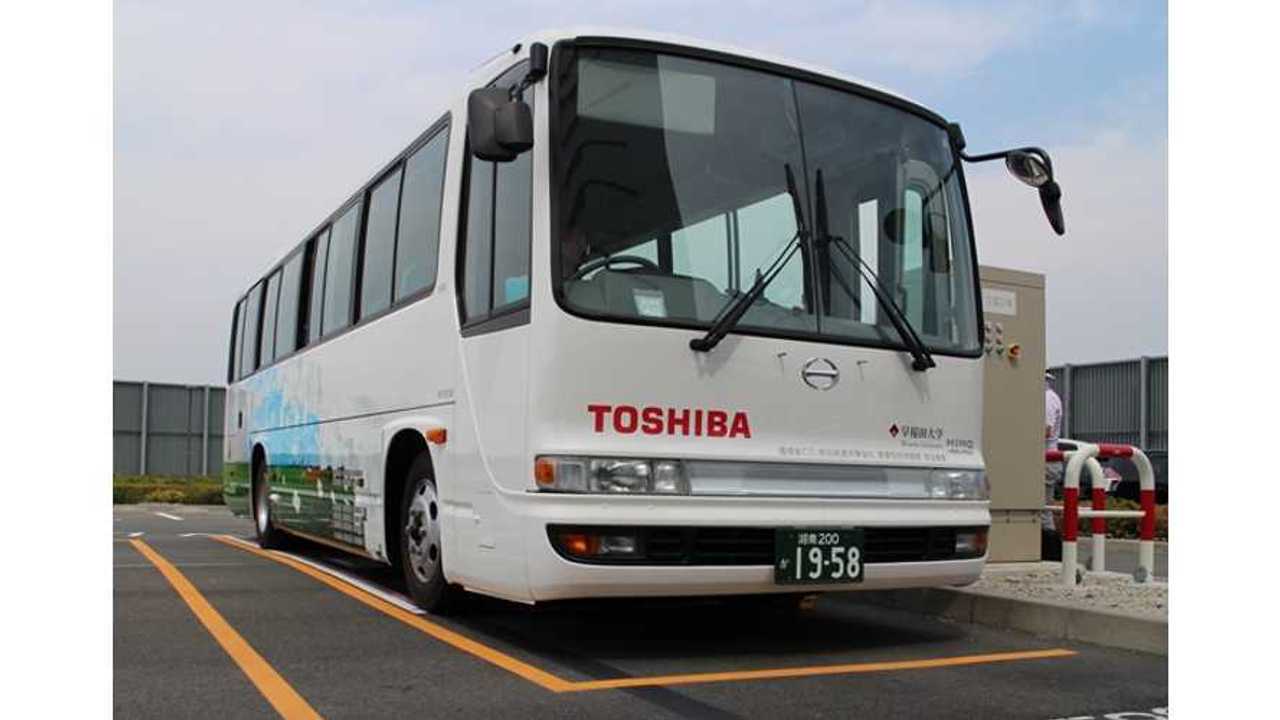 Toshiba began field tests of its new wireless charging system, designed in collaboration with Professor Yushi Kamiya at Waseda University, in a prototype electric bus (video on bus below), that is also equipped with Toshiba's SCiB lithium-ion batteries.

The Japanese company is using the bus for high-speed journies on expressways for the very first time.

The route covers some 11 km (7 miles) one way, with a 15 minute stop thereafter for recharging the batteries and heading out again.

The battery pack itself is 52.9 kWh end enables driving up to 89 km (55 miles), that is if you believe in optimistic Japanese test cycles.

"The 45-seat bus is powered by a long-life, high-output SCiB™, Toshiba’s advanced lithium-ion rechargeable battery, and will make regular trips between All Nippon Airways Co. Ltd. facilities in Tonomachi, Kawasaki and Haneda Airport in Tokyo. The 11-kilometer journey will test the bus and its performance under various traffic conditions, and will allow Toshiba to verify the convenience and practicality of contactless charging, along with its contribution to reducing carbon dioxide (CO2) emissions.

The contactless charger, designed in collaboration with Professor Yushi Kamiya of the Faculty of Science and Engineering at Waseda University, replaces conventional electromagnetic induction1 with an innovative and highly promising magnetic resonance2 system that is installed in the ground, under the bus. The system is easy to operate; charging starts once the driver pushes a button on the bus dashboard. As it is cable-free, all risk of electric shock is eliminated.

Electromagnetic induction requires close alignment with the battery, and a small distance separating charge transmitting pad and receiving pad. Magnetic resonance is much more forgiving: The charge pad of Toshiba’s system and the SCiB™ battery can be misaligned by as much 20cm along the width and 10cm along the length, and they can be as far as 10cm apart. Tests have verified that the system’s radio emission level meets limit regulations and do not interfere with radio signals of nearby equipment.

The SCiB™ battery of the type installed in the test EV bus is rugged, reliable and has a long life, showing almost no fall-off in performance even after 15,000 quick charge and discharge cycles. It is highly suited for use on shuttle buses operating at locations such as tourist sites and airports, which must combine heavy use with frequent and fast charging. It takes only 15 minutes or so to charge SCiB™ to a level necessary for the EV bus to run one-way between the test sites.

The battery also delivers high output that, combined with improvement in performance of drive components allows the bus to achieve a top speed surpassing that required for safe operation on expressways."

"Development of this system has been supported by the Ministry of the Environment under its Low Carbon Technology Research and Development Program since 2014. A field test that deployed a small EV bus incorporating a similar charging technology started in February this year and will run until December.

Toshiba will continue research and development of contactless charging and other advanced technologies that contribute to reducing environmental loads, and work to improve the quality of urban transport by providing SCiB™ for various transportation systems.

“I think we have developed a high-quality system by combining the new, convenient contactless charger with a high-power SCiB™ suited to frequent charging. I look forward to the field testing, as it will be the first time where a bus charged in this way has operated on the expressway. I am confident that the results will make a useful contribution to the promotion of EV buses.”

Overview of the Electric Bus System

Overview of the field test