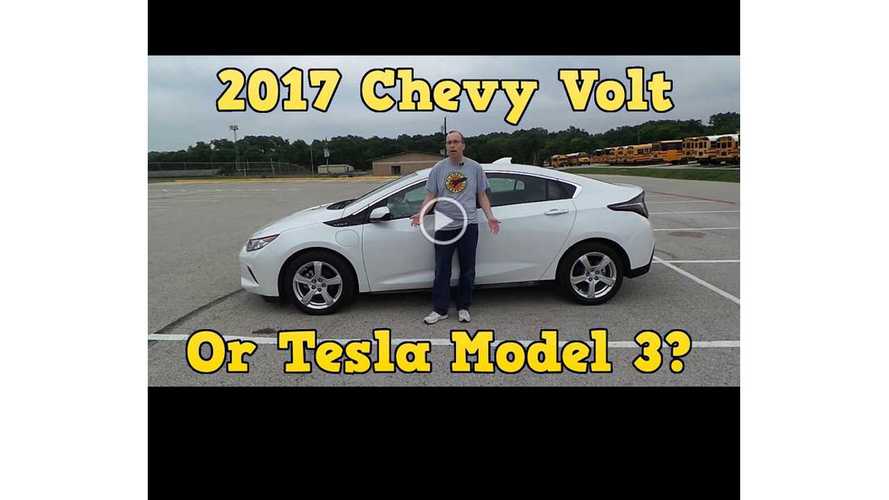 By: David Murray
The mainstream car reviewers may have better equipment, the help of an official camera team, crane cameras attached to chase cars, etc.  But they just don't know how to properly review an EV or a plug-in hybrid.  They spend far too much time talking about how many cup holders it has than explaining the capabilities of the drivetrain.

Putting a 2017 Chevrolet Volt through its paces

I sent Robert Llewellyn a message a while back inviting him to come review my Volt. I never saw a response, but I didn't expect him to fly to the USA to do that anyway.  So I took it upon myself to create this review.

I wasn't sure how it would be accepted on my youtube channel which has almost 300,000 subscribers who are there to see content about retro computers and game consoles.  There have been a few dislikes, but overall I think it went over well.

My goal is that this video will rise in the ranks on youtube search results so that if people do a search for the Chevy Volt, this review will be at the top of the list. Not because I'm vein, but rather because I want more people to buy the Volt and I feel like a proper review would help accomplish that.  I found it odd that nearly 400,000 people would shell out $1,000 and wait 3 years for a Tesla when the Volt is almost as good, cost less money, and is available today.  So that's why I made the Model 3 comparison in this review.

I had planned a variety of other funny scenes where I mixed in some retro-computer stuff into this video to make it funny and appeal to my fans.  For example, I had planned to show plugging a Commodore SX-64 into the center console and carrying it around in the passenger seat as my "music player."  I had several other ideas, but eventually cut them out.  The video had grown to over 20 minutes long before I had even filmed those scenes and I knew I was going to have to shorten it.  I cut a lot of the less interesting stuff out and got it down to 18 minutes.

The scenes at the drag strip happened exactly as shown.  I had virtually no idea what I was doing, but the first time I went, I did beat that modified Honda.  However, it appears he nearly stalled his engine on take off, but that only compensated or my horrible one-second reaction time.  So I would have beaten him either way.   My wife was filming and she was feeling sick so we only got to do the 3 runs.  Otherwise I would have at least gone two or three more times after I fixed my window camera so I would have better footage.  But also I was legitimately curious to see who I could beat.  Even that pickup that beat me on my 3rd drag race, might not have won had I been in EV mode and had a better reaction time.  It was explained to me later that I'm actually supposed to go on the last yellow light, not on green.  So that would have probably helped.   I'm tempted to go BACK to the drag strip sometime and just race without worrying about the cameras and everything.

Also, I've had the new Volt for about 2 months now and I've put almost 2,000 miles on the car and only about 100 of those are on gas, and at least half of the gas was burned on purpose creating this video.  I am absolutely thrilled with the car.  My wife was driving a Nissan Leaf and she's now driving my old Volt.  She's holding out for the Bolt EV later this year.  But after having the Gen-2 Volt for a while, the 2013 Volt feels extremely dated inside and is noticeably sluggish on acceleration.   Don't get me wrong, the 2013 was a great car and I never had any problems at all with it.  But there's no doubt the Gen-2 is better all around.