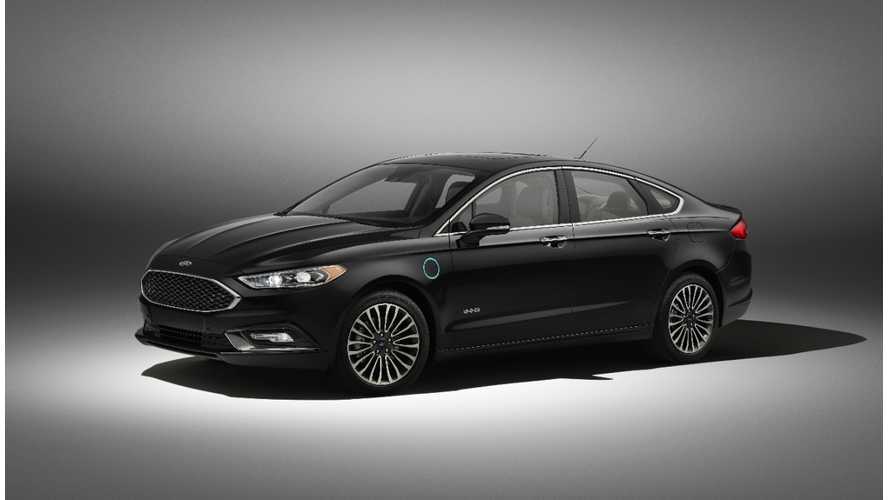 About 3 weeks ago, InsideEVs got its hands on a window sticker for the new and refreshed 2017 Ford Fusion Energi and already broke the news that the plug-in from Ford had also undergone some slight efficiency upgrades.

But today Ford made it official, while also curiously putting the emphasis on the total range of the car, calling it "a plug-in hybrid that can go further than any other".

As for that number, the Fusion Energi can now travel some 610 miles (EPA) between stops - petrol included.

“Plug-in hybrids are electric vehicles until you run down the battery,” said Wade Jackson, marketing manager for Ford Fusion on the recent upgrade, “then they work exactly like a conventional hybrid.

(The) Fusion Energi – with a full battery and a full tank of gas – can go from San Diego, through Los Angeles and all the way up to San Francisco, and still have up to 110 miles of range remaining.”

Petrol range not withstanding, here are the pertinent details in regards to the electric abilities of the car:

Ford notes the improvements are achieved through changes to the car’s hybrid powertrain software and via adjustments with the regenerative braking.

Kevin Layden, who is Ford director of electrified powertrain engineering, says that the Fusion Energi is a "great option for people who might not live, work or play near electric-vehicle charging stations, or who take trips to places where the electric-vehicle infrastructure is not yet established."

Mr. Layden also added that the “Fusion Energi gives ...the freedom to go gas-free for shorter trips and the fuel efficiency of a gas engine for longer trips...and it’s very affordable.”

As to the affordability, the new Fusion Energi's base MSRP has actually been lowered for the 2017 model year, now starting at $31,995 (including $875 destination).

We should note that production of the Fusion Energi actually kicked off April 4th of this year, and the first ~500 or so copies have already made their way to Ford dealers this month.  So for once on the news, if you want one...you can actually go get one!