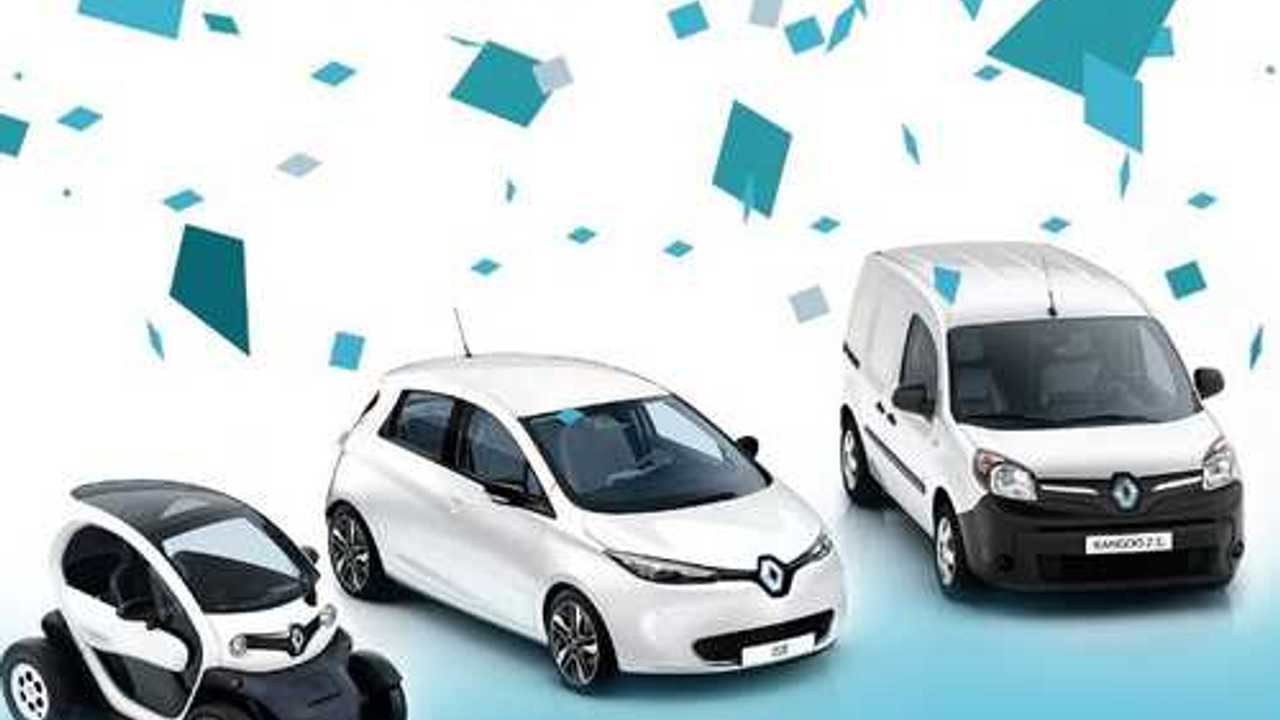 Renault handed over the keys to its 100,000th electric car, a ZOE, in the Norwegian capital of Oslo
From the left to the right: Anders Gadsbøll, Managing Director RBI Norge AS Eric Feunteun, Director of Electrical Vehicle Division of Renault Åsmund Gillebo, the 100,000th EV customerSylvain Devos, Managing Director Renault Nordic

On September 9th, 2016, Renault sold its 100,000th electric vehicle - the ZOE, which was ceremoniously handed over to a customer in Oslo, Norway.

"The electric vehicle is a Renault ZOE, sold to Mr. Åsmund Gillebo, a 41 year old Norwegian. To get the best out of his ZOE, he has been presented with five years of Fortum recharging and 100,000 minutes of recharging time from Grønn kontakt, two local energy suppliers."

In Europe, Renault holds a large 27% market share of BEV segment, while in France, that share exceeds a massive 50%.

The first half of this year ended with about 15,000 sales (excluding the Twizy), which is a third more than year ago.  In passing the 100,000 mark, Renault becomes the 6th automaker to cross that level.

In the first half of 2016, Renault sold more than 15,000 electric vehicles (excluding the Twizy), an increase of 32% on the previous year. This success confirms Renault’s status as the European market leader, especially for utility vehicles. Indeed, on European roads, one in every four electric vehicles is a Renault. In France, half of all electric cars are Renaults. Renault’s main markets for electric cars are France, Norway, the UK, and Germany.

“Every year there are more customers for electric cars and Renault is making a major contribution to this with its constant innovation and dedication to developing infrastructure. Our customer satisfaction, which stands at 98% for the ZOE, encourages us to keep pushing onwards”, relates Eric Feunteun, Director of Renault’s Electric Vehicle Division.

Renault boasts the most comprehensive range of 100% electric cars on the market, enabling it to meet a variety of needs. The range is made up of the compact ZOE city car, the Kangoo ZE utility vehicle, the compact urban two-seater Twizy (and its utility version, the Twizy Cargo), and the stately saloon the RSM SM3 ZE (the best-selling electric vehicle in Korea).

The ZOE, the best-selling electric vehicle in Europe, dominates the market for electric private cars with over 23% market share. The Kangoo ZE, the leading electric utility vehicle in Europe for the third year running, sets the benchmark for professionals and has won a number of tenders, including the French Post Office, and the French electricity provider ERDF in Norway. Lastly, with 17,000 models sold, the Twizy is the trailblazer for new ways to get around all over the world, and is extremely popular in car-sharing initiatives in both Europe and North America.

Renault, a key player in the electricity market

With cutting edge electrical technology, proven by its performance in Formula E, Renault is naturally winning over an increasing number of users. Since it began its electric adventure Renault has adopted a global strategy for electric mobility, and the development of infrastructure in particular. Renault is involved in a number of projects to install public recharge points, working with public bodies and other players in electric mobility like energy technicians. There are currently over 100,000 public recharge points around the world, 80,000 of which are in Europe, and they are constantly growing in number. As an example, Renault supports European Commission projects for the TEN-T fund (Trans European Transport Network), which have installed over 2300 quick charge terminals along highways and major roads in over 15 countries.