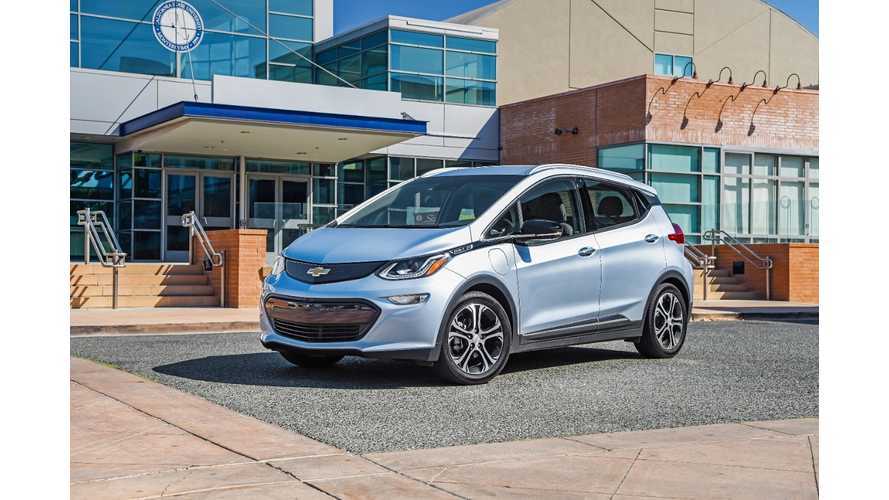 Though the highlight (or lowlight) of this particular test drive of the Chevrolet Bolt by the Detroit Free Press' Mark Phelan may indeed be the fact that it contained the first reported crash of the Bolt (see images here) our focus will not be on the wreckage, but rather on the achievement made by Phelan in his limited time behind the wheel.

It was just a minor accident anyways, so let's move on...

Phelan set out to drive some 200 miles in what he described as "bitterly cold temperatures that sapped its battery’s charge." And range is what we'll focus on here.

"I’d covered about 90 miles in the Bolt that day and had more than 100 left, according to a charge gauge that had proven a bit conservative as I drove from downtown Detroit to Ann Arbor and back, with a few detours thrown in."

"The range meter — the EV equivalent of a fuel gauge — predicted 192 miles when I picked up the fully charged Bolt from General Motors HQ on the Detroit Riverfront. I was disappointed, but not surprised, given bitterly cold temperatures around 11 F and cutting winds blowing in uninterrupted from Manitoba."

"In that context, seeing a predicted range less than 20% below the EPA figure was a pleasant surprise."

Phelan adds that he kept the cabin "comfortably warm" during his drives, but had the fan set on low and relied mostly on the seat and steering wheel heaters to stay warm. Quoting Phelan:

"I was comfortably warm the whole day. I increased the HVAC’s temperature setting occasionally to clear the windows and warm my toes, but the seat and steering wheel heaters worked so well that I turned them off a couple of times when I grew too warm."

In mixed highway and city driving, Phalan immediately noticed that the Bolt is much more efficient off the expressway.

Phelan concludes his write up with this:

"By the time I got to Detroit’s 150-year-old farmer’s market in Eastern Market, I had covered 90 miles and had a projected 103 left."

"My initial goal of wringing 200 miles from a single charge of the batteries seemed within reach, despite the battery-draining cold."

It's at this time when the Bolt got rear-ended. Phelan closes:

"I’ll never know if I could have hit 200 miles on a charge, but I’ll always believe I could have."

Several times in his review and others we've covered in this past, it's noted that the Bolt's estimated range remaining is generally on the pessimistic side, meaning that if it said 103 projected miles left, Phelan could most likely have driven well over that amount to hit his target of 200, despite the bitter cold.