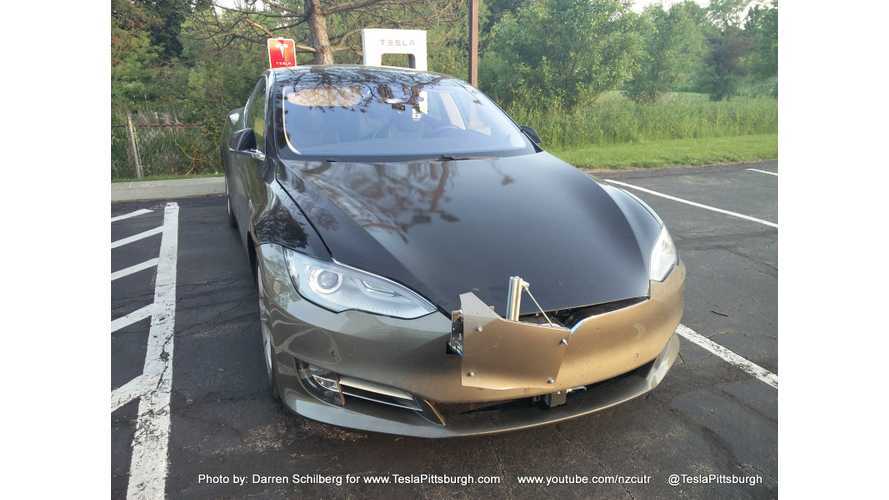 Darren Schilberg of Pittsburgh, Pennsylvania spotted a peculiar Tesla Model S test mule at the Cranberry Supercharger station north of Pittsburgh. Speculation says that there are many likely reasons for the vehicle and in the way in which it is outfitted.

Schilberg is an avid Tesla fan and is a member of the group Tesla Pittsburgh Facebook (check it out here). The group is run by Matt Simmons who also developed Tesla Pittsburgh, along with a Twitter page. Matt runs the groups as well as blogging for Teslarati. Schilberg forwarded the captured images to Simmons for use on Teslarati and the other groups.

The car in question is a Model S (pre-refresh) with what appears to be a different front bumper. There is a sensor located behind the protruding mounted bumper.

On this Model S, unlike the refresh or the original, there are many extra radars and sensors. The units on the front of the vehicle are in excess and overlapping. This may be an indication of the new Autopilot 2.0 system. It is almost as if the original Model S Autopilot sensors are in place and functional, with the addition of the refreshed Model S and the Model X equipment, and Autopilot 2.0. If Tesla could install and run all of these together on one vehicle and compare data, it would be very efficient.

The above speculation may or may not be the case, as we have no idea what is going on with the sensors (it is fun to guess though). Perhaps this is all testing equipment set up for the second phase of the Model 3 unveiling.

A Closer Look At the Mounted Bumper Via Teslarati

A Closer Look At the Mounted Bumper Via Teslarati