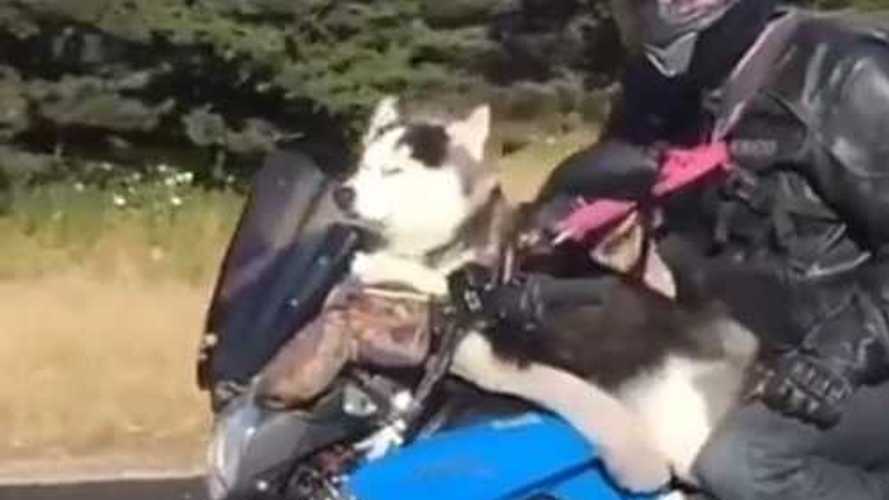 By: Eric Loveday
Terry Hershner, holder of multiple electric motorcycle records, including riding 1,000 miles in 24 hours, riding 300 miles on a single charge and winning the Vetter Challenge, reached out to InsideEVs to share some of his latest endeavors.

When Hershner isn't setting records, he's often spotted on his Zero electric motorcycle with a partner riding along. His partner, a dog by the name of Charger, perhaps loves riding even more than Terry does. Heck, Charger even has her own Facebook page.

"How she rides when she's tired! No need for goggles. She is behind the windshield! She loves riding on the Zero more then anything we do together!"

Hershner was gracious enough to provide us with some background on himself as a rider, as well as to fill us in on Charger, the dog that's almost always riding around with Terry on the Zero.

“Charger is my 11 month old Husky pup. I am a motorcycle guy for life, and the past 5 years purely an electric motorcycle guy. I'll never drive or ride a gas vehicle ever again for many reasons, but basically because an electric is more fun to ride. So I got Charger at 10 weeks old with the intention of teaching her to ride and so started training her on the motorcycle right away. She was a natural and learned how to balance and lean pretty much the first week."

Charger As A Pup

"Because the motorcycle I ride is a Zero electric motorcycle, there is no noise to hurt her ears, no smell coming from the exhaust so she can really engage with nature, no vibration to tire her out when she stands up, and no heat radiating from the engine or exhaust that would be on a gasoline powered bike. Just pure riding enjoyment for her with the wind in her face."

"We have logged a little over 10,000 miles together on the Zero now. She goes everywhere with me. In the morning when I grab my helmet she starts to spin around and do a little dance and the tail starts wagging super fast. As soon as I open the door she runs over and jumps on the bike. She loves it so much!!"

"A month ago we did 518 miles in a single day together on the Zero. A record for a production electric motorcycle with accessory chargers. We rode from Santa Cruz to Solvang for lunch and then back again. We had about 5 stops to charge that took less than an hour each using a new supercharger that is being developed by the aftermarket, specifically for the Zero bikes and will be available soon."

"Charger and I have plans to ride around the US next year, visiting dog parks with nearby charging stations, doing some EV awareness speaking engagements at high schools and colleges, and to meet EV enthusiasts and dog lovers all over. It will be the time of her life!"

"She was supposed to be a Pomeranian Husky also known as a Pomsky, but I'm not sure now because she got bigger than I expected. I probably wouldn't have tried to teach a dog to ride a motorcycle that I knew ahead of time was going to be 50 pounds, but it turned out just fine. I wouldn't have guessed that. I did have to have a custom Corbin motorcycle seat made so I could sit back farther and higher up to make room for her and it's worked out great! And the seat is more comfortable for me too so that was an added bonus."

"Some people I meet say she might be a Pomsky because of her fluffiness, but others have doubts. I'll let you decide. But it doesn't matter, I love her just the way she is.”

Hershner adds that InsideEVs' Ted Dillard captioned a photo months ago that really nails it all. Below is that photo and the caption from Ted.