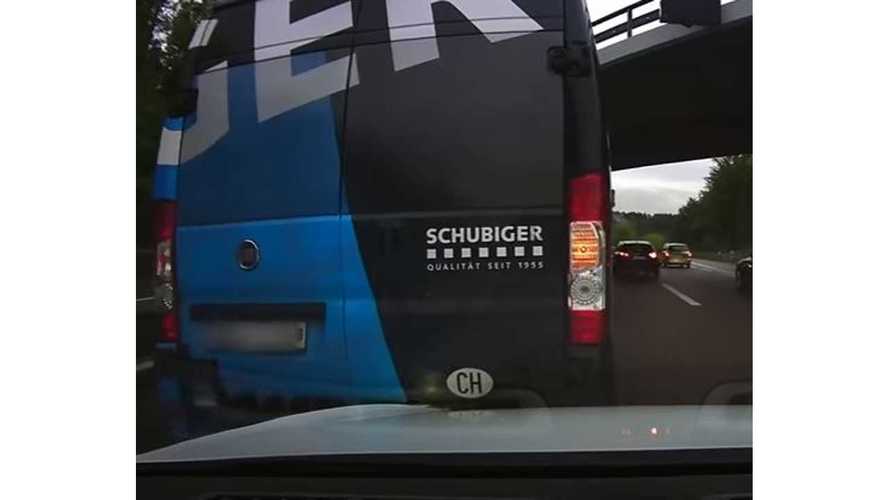 Even if the car reacts correctly thousands of times on its own, there's a chance that some situation will trip up the system, resulting in a crash as seen in the video above.

The Model S had active cruise control engaged, yet it didn't stop for the van on the shoulder as the Tesla's sensors were instead locked on the car that veers right to avoid colliding with the van.

Editor's Note:  The YT video by the Model S owner has now been taken off-line (perhaps due to legal/fault issues for the parties involved).  We will re-host if available, full details still available below.

Update 2:  A GIF of the accident has now been made available (GIPHY via Electrek)

The Model S owner who was involved in the wreck uploaded a video of the accident (above) to YouTube (above), along with a rather lengthy description:

None of the safety-systems worked correctly:

1. The TACC, active cruise control did not brake as it normally does 2. The collision avoidance system (AEB) did not make an emergency brake 3. The forward collision warning turned on way too late, it was set to normal warning distance 4. The TACC actually was speeding up just before I did hit the brakes

Yes, I could have reacted sooner, but when the car slows down correctly 1'000 times, you trust it to do it the next time to. My bad..

In normal operation, the AP slows down as soon as another car puts one wheel on the lines to your lane.

The whole front of the car needs to be replaced, including a parking sensor and a steel beam.

I was in contact with Tesla Europe, but they could not provide me with any useful information. They just stated that "all systems worked as expected". Well, certainly not how I expected them to work...

No automated system is failsafe though and in the end it's still the driver responsibility to be alert and to avoid being the cause of an accident such as this.

Commenter Viktor tells us that Tesla specifically warns of this situation in the manual:

“Warning: Traffic-Aware Cruise Control can not detect all objects and may not brake/decelerate for stationary vehicles, especially in situations when you are driving over 50 mph (80 km/h) and a vehicle you are following moves out of your driving path and a stationary vehicle or object, bicycle, or pedestrian is in front of you instead. Always pay attention to the road ahead and stay prepared to take immediate corrective action. Depending on Traffic-Aware Cruise Control to avoid a collision can result in serious injury or death. In addition, Traffic-Aware Cruise Control may react to vehicles or objects that either do not exist or are not in the lane of travel, causing Model S to slow down unnecessarily or inappropriately.”