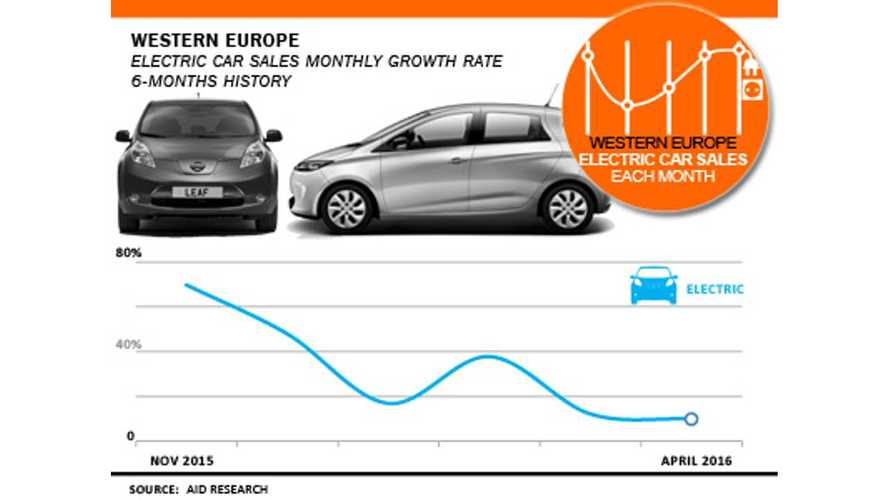 Now, we just have to sit and wait for Germany's new plug-in car incentives and new longer range models like BMW i3 to really kick in.

Add in a longer range VW e-Golf, the new Tesla Model X (plus a dozen other new offerins for 2016), and eventually the Opel e-Ampera (Bolt) and next generation LEAF in 2017 we are aren't too worried about plug-in growth prospects for Europe.

Thats the slowest monthly rate of growth since November 2014.

The bad news for the electric car industry is that in terms of market share there has been next to no progress.

This April, compared with the same month last year, West Europes electric car sales share remained stuck at a tiny 0.6 per cent, according to AIDs own data.

European demand for electric cars, a segment best typified by this years sector-dominating Nissan Leaf, has slowed down to walking pace, continuing a steady slowdown evident since the beginning of this year.

But for the industry, Aprils distinct slowdown to a single-digit rate of growth isnt quite as bad as it seems.

Aprils slowdown was by no means unexpected, and the reasons are easily spotted"

We look forward to more glass half-full monthly recaps from EagleAID once the numbers really start to take off this summer.  By our estimation the outfit will be in its glory for May with German incentives yet to take hold, but will need another approach from June onward.