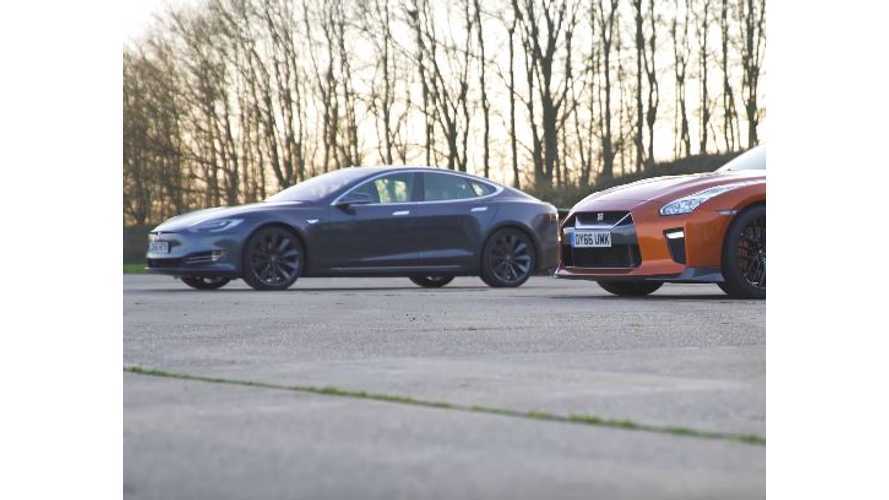 The extensive video description basically lays it all out quite well. What we have here is a matchup featuring the Tesla Model S 90D versus the Nissan GT-R, but this is not your typical drag race sort of event. It's rather comical to say the least, featuring the pull the tablecloth out from under the dishes/glasses that's not so common in automotive matchups.

"This is no ordinary head2head. This particular version pits electricity against petrol. The Telsa Models S vs the Nissan GT-R, in no ordinary challenge either.

In this video I measure acceleration between the two cars, but how I hear you cry! Well, I put together two very special tests to demonstrate just how quick these two cars are off the mark.

One involves plenty of broken glass, the other features some core strength. So which one of these cars will reign supreme? Will the electric charged Tesla Model S take the crown, or will good old fashion fossil fuels reign supreme? Let’s find out."

Now, you may be wondering why the 90D version of the S was selected over the more powerful P90D or P100D. Video uploader CarWow explains the selection process below:

"TESLA FANBOYS TAKE NOTE: In this video we have compared the standard GT-R against the Model S 90D as they are the SAME price. We haven't used the more powerful P100D as it costs half as much again and this video is about which gives you the most acceleration for your money: Gasoline or Electric - so the cars MUST be compared on price! Not power. Otherwise we could have just got a tuned GT-R with 1000hp for the same money as the P100D!"

Not Your Typical Versus Matchup