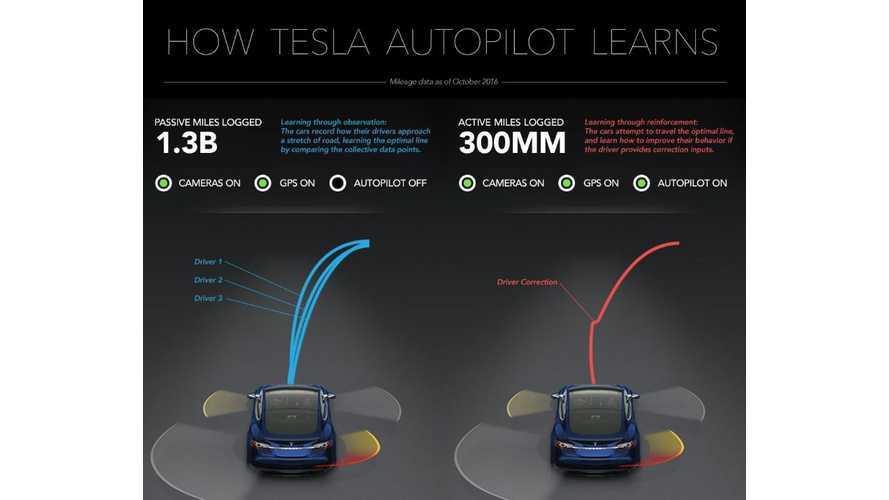 The article explains how Tesla's real-world, on-road autopilot data places it leaps and bounds ahead of any other automaker in the autonomous driving segment.

"There was, in hindsight, a clear element of risk to Tesla Motors Inc.’s decision to install Autopilot hardware in every car coming off the production line since October 2014. It paid a price, with federal regulators probing the deadly crash of a Model S while in driver-assist mode and critics slamming Tesla for rolling the technology out too soon."

"But there was also a reward. The company has collected more than 1.3 billion miles of data from Autopilot-equipped vehicles operating under diverse road and weather conditions around the world. And in the frantic race to roll out the first fully functional autonomous vehicle, that kind of mass, real-world intelligence can be invaluable."

It's not just Hull who believes Tesla is leading the way in self driving. Nidhi Kalra, a senior information scientist at the Rand Corporation, stated there was no question Tesla has a big advantage, noting Tesla can learn at a much more accelerated level with an open fleet vs a limited amount of employees and trained drivers testing the systems.

Adam Jonas, analyst at Morgan Stanley for autos and shared mobility, chimed in too, stating that Tesla is “in a very unique position to push the state of the art of algorithmic driving and machine learning in personal transport."

And even Richard Wallace, director of transportation systems analysis at the Center for Automotive Research in Ann Arbor, Michigan, had some positive notes to add:

“Whether they are ahead or not, Tesla certainly has tons of data. They will be able to analyze that six ways from Sunday and continue to tweak their algorithms.”

Most automakers, aside from Tesla, keep secret their autonomous driving programs, to some extent at least. Few automakers are willing to reveal how far along these programs are, but not Tesla who is openly testing autonomous driving with Tesla owners out in the real world.

Back to Dana Hull, the author of the Bloomberg article. She states:

"Of course, not all miles are created equal: there are semi-autonomous as well as fully self-driving ones, real-world vs. simulated, highway vs. those racked up in tricky urban environments."

"The 1.3 billion miles of data Tesla said it has collected represents those covered by its vehicles even when Autopilot isn’t switched on—it operates in “shadow mode,” with sensors tracking real-world data when it’s off.  In October, Musk said on Twitter that the number of cumulative Autopilot-on miles was 222 million."

All of this would seem to put Tesla so far out in front that it's unlikely some other automaker can catch up. Fortunately, it seems Tesla is open to sharing this data so that other automaker can benefit from this pioneering, on-road research project of sorts. Isn't that nice of Tesla?