Automatic Emergency Braking in AutoPilot with v8.0 Avoids Serious Accidents Such As This 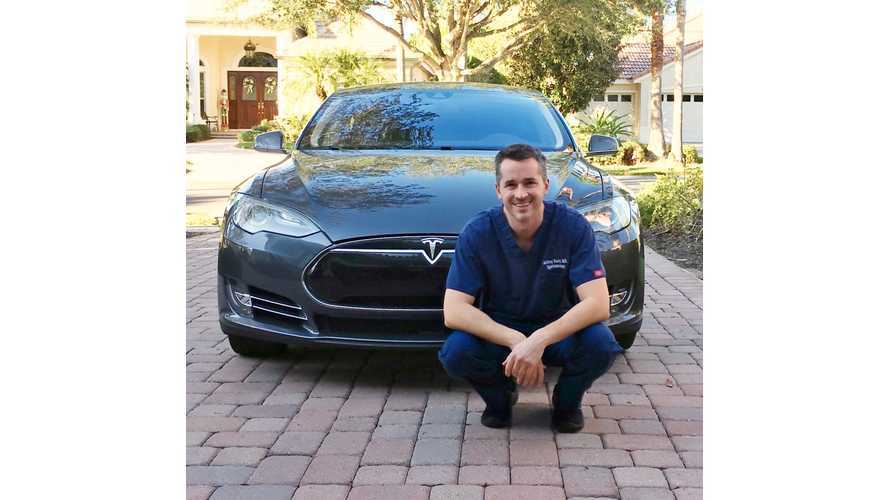 Recently one my closest friends in the world had brush with disaster while driving his Tesla Model S on the freeway.

I often see anecdotal stories and dash cam videos posted about Tesla AutoPilot and Emergency Braking from time to time.  I always intriguingly read with my engineering eyes how the system functions. However, my reaction was much different this time.  Jeff and I grew up on the same block, played shortstop and second base together, spent holidays together, etc.  This time it hit close to home.

Jeff received his Model S 85 in the winter of 2015.  As a physician covering numerous offices in the Tampa/St. Pete area, he drives 18,000 miles per year on average, mostly highway.  For those not familiar with Florida, the highways are flat, straight and boring; the ideal setting for AutoPilot.  It has provided him the opportunity to travel roughly 12,000 miles with AutoPilot engaged.

Here is an idea of the kind of view Jeff was working with. (It wasn't a FedEx truck, but similar size and lack of windows.)

His incident occurred during rush hour on the highway approaching a construction zone.  Jeff was in the right hand lane traveling 60 mph behind a small box truck (think little moving van) with the follow distance set to 2.  To avoid a debate of following distance, this speed and spacing is very normal during city rush hour.  If you add any extra space, an impatient car will fill it.

He noted on the User Interface, AutoPilot was tracking not only the truck in front of him, but the vehicle in front of the truck he was unable to see since the truck had no windows.  New since the recent software update to v8.0.

Jeff was completely unaware of the situation unfolding out of his view.  The vehicle in front of the truck had abruptly stopped for road debris.  The truck either choose not to or was not able to stop, instead veering off the highway - leaving Jeff facing a stopped vehicle.  Since Automatic Emergency Braking (AEB) activated before the truck veered off the highway, the Model S stopped with room to spare.  The full incident measured just a few seconds, covering not much more than 100 feet.

Thankfully not the outcome of this incident.

Living in Houston, I see results of these situations too often, except drivers don't have AutoPilot or Automatic Emergency Braking, and they don't have the same fortunate outcome.  If Jeff had been driving manually, he said there is a chance he would have been following closer, and no chance he could have stopped in time without AEB.

This technology needs to become standard on all vehicles, not just Teslas or luxury cars, all vehicles. Trucks (light duty and heavy) and SUVs need AEB the most.  0.5 x Mass x Velocity ^2 is the governing equation to the energy involved in a collision.

Most of all, I am thankful that Jeff's Model S didn't just allow him to walk away from a bad accident, but prevented it.  He went home to his wife and child spooked, but not injured.

You can find his words on this TMC post here.  I spoke with him on the phone after the incident to fill in the extra details here in this story.