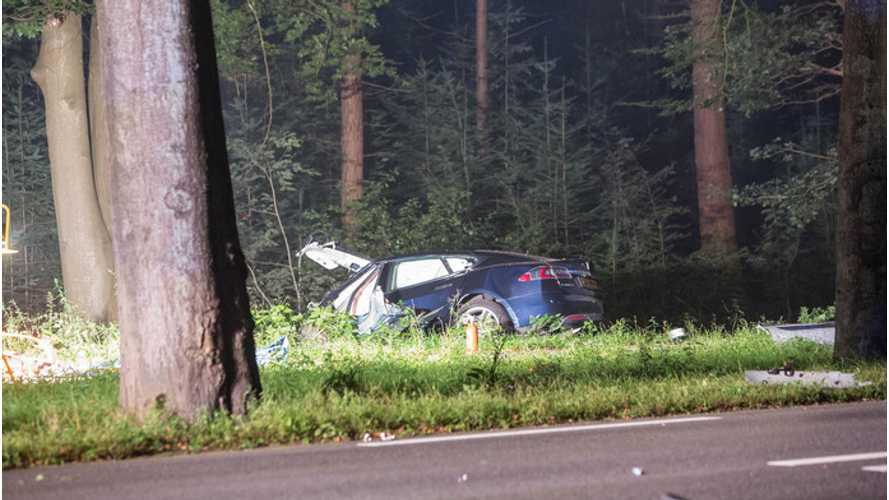 Tesla Model S Crash on the Hilversumsestraatweg between Baarn and Hilversum, Netherlands

Tragically, a 53-year-old Netherland's man lost his life as his Tesla Model S collided with a tree. The high speed impact caused the car to start on fire and the driver was deceased prior to the arrival of emergency teams. There are no details regarding the cause of the crash.

Firefighters experienced difficulty putting the fire out. There was fear that the vehicle may have been electrified, due to the separation of the battery pack from the car. Battery cells were reportedly ejected from the battery pack upon impact.

Reportedly, the initial fire was caused by the battery parts that had fallen out of the Model S. Ronald Boer, speaking on behalf of the team of firefighters, explained that the car was completely destroyed, and that there was no way to safely turn off the batteries. For this reason, the body of the man could not be recovered:

A news report from the Netherlands noted that:

"The man's body still has not recovered. This is because the battery that powers the electric Tesla, partially thrown from the car when it crashed into the tree. Another part of the battery is still in the car and makes it possible for the car under voltage condition ... Technical Tesla employees have arrived at the scene of the accident, and advise the fire department on how they can best proceed with the salvage of the body without being electrocuted.” (Translated from Dutch)

The representative from the fire department made it clear that usually there is no problem handling electric vehicle crashes. Had the vehicle been upright and accessible, the team should have been able to safely manage the situation.

Unfortunately, the wider media immediately began generating rumors that Tesla had yet another Autopilot crash on its hands, but thankfully, Tesla has already issued a statement today that denies Autopilot was in use at the time of the wreck, and states that the car was travelling in excess of 96 MPH when the crash occurred.

Here's the statement from Tesla:

"We are working with the authorities to establish the facts of the incident and offer our full cooperation. Thus far, we can confirm from the car’s logs that Autopilot was not engaged at any time during the drive cycle and that, consistent with the damage that was observed after the vehicle struck the tree, the vehicle was being driven at more than 155 kph (96 MPH)."

Also, questions are arising (again, generally from those sources originally speculating on the use of AutoPilot) about why Tesla's safety features didn't help impede the terrible incident. Tesla, along with the Netherland's Traffic division, has promptly initiated an investigation. A Tesla spokesperson told Business Insider:

"Technical personnel are on the scene, and we are working with the authorities to establish the facts of the incident and offer our full cooperation. We are deeply saddened to hear that this accident involved a fatality. We will share our findings as soon as possible following the investigation."