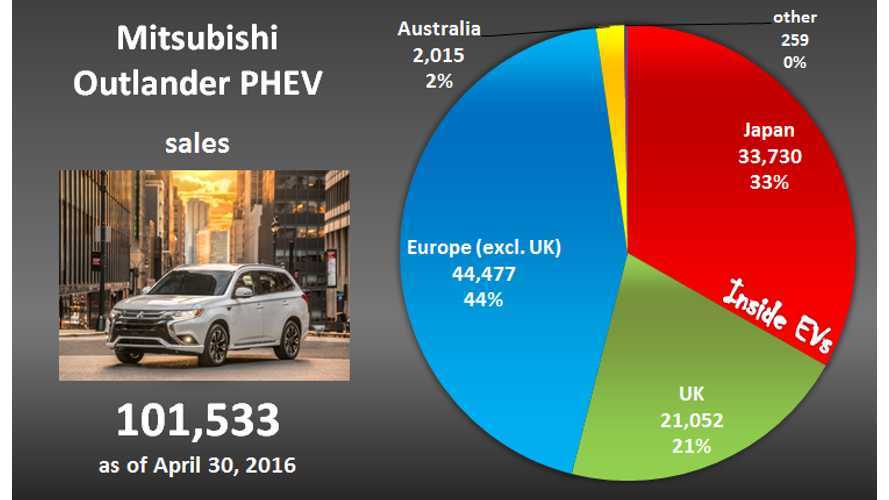 The Mitsubishi Outlander PHEV has just recently become one of a very few plug-in electric cars to sell more than 100,000 copies worldwide, and the first in the SUV/utility class to do so.

The Japanese EV began its plug-in adventure in January of 2013 in Japan, and by late 2013 sales also began in a first few countries thoughout Europe (but most of the sales volume to be found in Netherands). The UK received shipments starting in 2014, and that ultimately became of one of the most important markets for the Outlander PHEV.

Interestingly, Australia makes up the 'blip' for the remaining percentage points at around 2%, as it leads all plug-in sales down under.

The big question is now how the Mitsubishi Outlander PHEV will do in the North America from late 2016.  We suspect it will do very well, selling solidly in the 4 digit market over time.

"The UK is a hugely successful market for the Outlander PHEV. Singularly it now accounts for over 20 per cent of the vehicle’s global sales. In fact, such has been UK consumer demand and Government push for environmental transport solutions, one in every two cars now sold by Mitsubishi Motors UK is a plug-in.

It’s not difficult to see why the Outlander PHEV is proving so popular. It has impressive fuel economy and ultra-low emissions – in a vehicle with the go-anywhere ability of four-wheel-drive. It has a total hybrid range of 541 miles and a 32 mile zero emission range using battery power alone, which is more than enough to accommodate the average daily commute.

As well as its official fuel consumption figure of 156 miles per gallon, the Outlander PHEV’s low emissions of just 42g of CO2 per kilometre mean there’s no road tax to pay. It is exempt from the congestion charge and it qualifies for the Government's £2,500 plug-in car grant."

“To reach this milestone is a fantastic achievement, which really underlines Outlander PHEV’s global appeal. Consumers in the UK have overwhelmingly made it their preferred choice for ultra-low emission motoring too. It is by far the nation’s leading plug-in vehicle.”