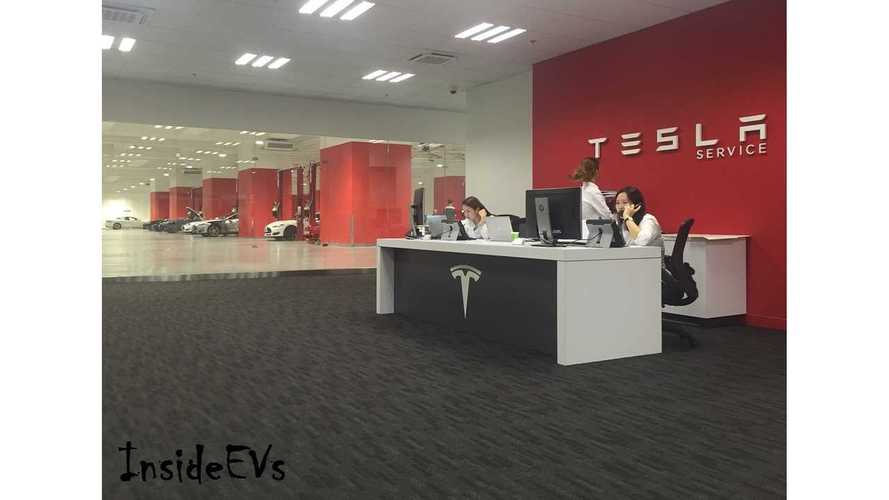 Size matters with many of Tesla's operations.  During a visit to Hong Kong in January, Elon had promised to launch a brand new service center to meet the growing demands of local owners (nearly 4,000 to be more precise and growing).

Without any official announcement, the new service center has started operations this month, but details on the total floor space and number of stalls available is still a secret. Some owners were unaware of the new location, as they were still receiving reminder emails to take their car to the old service center address that is a block away (which has now been converted into a Tesla delivery center).

Tesla claims that this is the largest service center in Asia and it will increase the service capacity.

Many patient customers have previously reported that an annual service took a few days to a week even with a regular to-do-list items.

In the last week or two since the new center came into full operation, a number of owners have reported receiving same day service for their annual check-up, which is a massive improvement. Same day service is not uncommon in Hong Kong, as ICE based service centers have been providing such an efficient service for quite some time now.

Customers will definitely want to see service speeds that will one day match F1 pitstop performance, that will differentiate standard service time compared to ICE vehicles in the other direction.

New Service Center at Basement Level in the Blue & White Building On The Left. The G/F at the Glass Building On The Right Is The Old Location Now Being Used as Delivery Centre.

With Tesla having over a 70% EV market share in the city, this Giga-sized service center should be able to cope with current demands, as well as the long waited RHD Model X - arriving in Hong Kong by the end of the year.