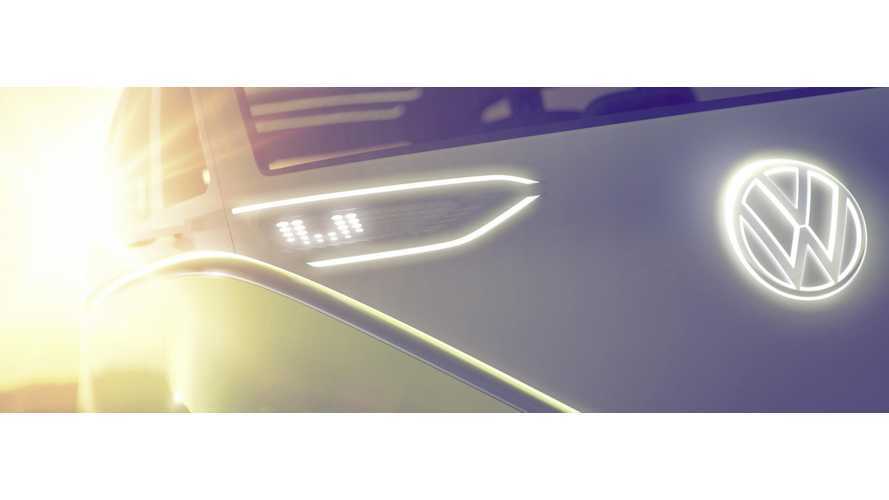 Volkswagen has announced a new all-electric concept for the upcoming North American International Auto Show in Detroit for January.

The EV will the be second model from the I.D. family (see earlier I.D. concept here), once again based on the Modular Electric Drive Kit (MEB) platform.

The German manufacturer describes the new project as an icon for the new era of electric drive.

The limited teaser video reminds us a lot of VW's classic Transporter (aka Bulli), so we assume this reveal will be the much promised re-launch of the microbus platform (first shown in 2011 - video of which below), but this time as a modern all-electric.

While it will still be classed as a "concept", just as the Bulli Concept EV was ~5 years ago, times have changed, and VW is more serious about plug-ins these days...so we look for a production version (but without the high-tech wizardry like a retractable steering wheel) to follow.

For now Volkswagen announced the concept as a double motor, all-wheel drive and autonomous driving vehicle, with a multi-functional, flexible interior.

"The concept vehicle forges links between the legendary origins of the Volkswagen brand and its electrifying future. Like the I.D., this concept is also based on the Modular Electric Drive Kit (MEB), and so it shows the potential and bandwidth of the MEB.

Since the presentation of the I.D. at the Paris International Motor Show in September of this year, these initials have stood for a new generation of fully connected, all-electric vehicles from Volkswagen. The I.D. also stands for purity in design language, form, and character as well as typical Volkswagen attention to detail and ideal use of interior space.

This I.D. concept vehicle will also be able to drive fully autonomously in the future. Press lightly on the Volkswagen logo, and the electrically retractable steering wheel disappears into the dashboard. While the driver relaxes, laser scanners, ultrasonic and radar sensors and cameras monitor other road users and the surroundings.

The I.D. concept vehicle in Detroit forges links between the legendary origins of the Volkswagen brand and its electrifying future. Its overall concept is revolutionary. It combines ample space for travel with a long electric driving range, to usher a new feeling of freedom – with zero emissions – and a new era of mobility."

Volkswagen to presents another model of the I.D. family in Detroit at 2017 NAIAS