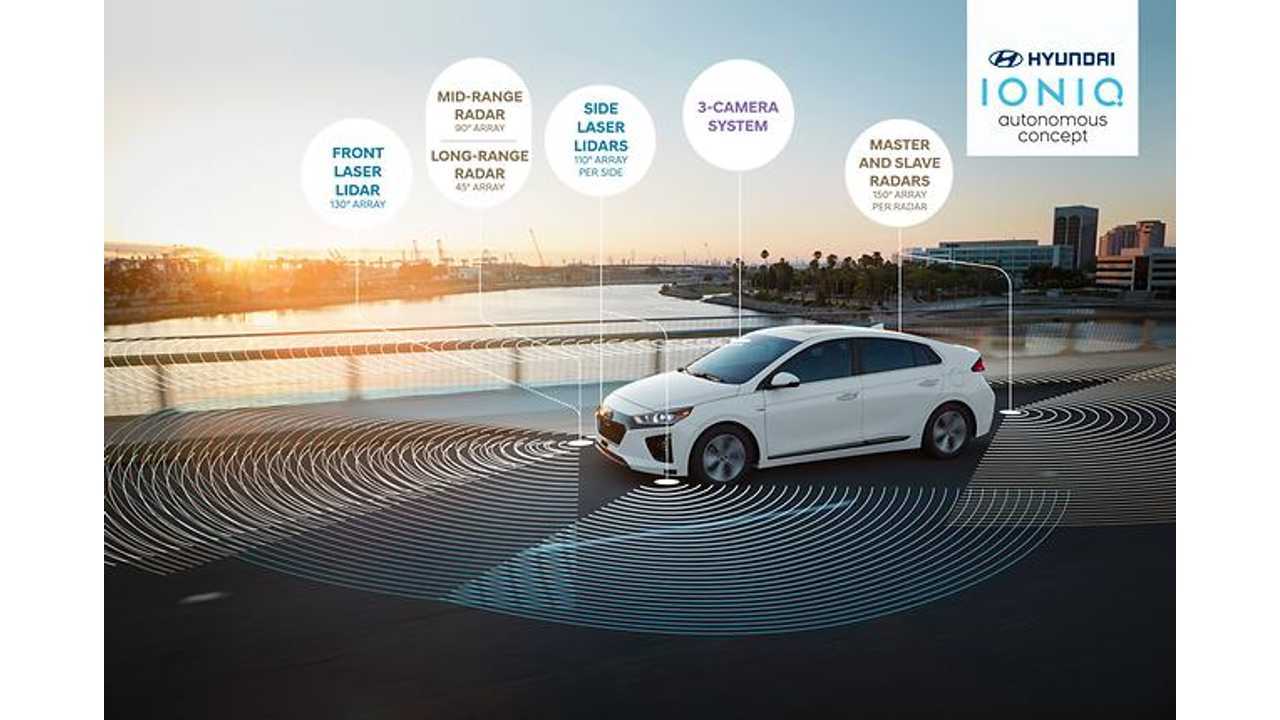 Hyundai first presented its autonomous driving program housed inside a new IONIQ Electric at the at the Los Angeles Auto Show this past November (see video above).

The all-electric car was equipped with a hidden LiDAR system in its front bumper - in order to better look like any other car on the road ... and less of a high school science project.

According to Autoblog, who recently got the chance to test the car on Las Vegas streets (and by that we mean, rode along a pre-mapped, all-right-turn route), no worries presented themselves on running down any pedestrians on busy routes, or running through any red lights; but the magazine did note that one can still experience some unsettling delays when the IONIQ's computer is processing data.

"The autonomous Ioniq uses one 140-degree and two 110-degree Ibeo LiDAR units in the front fascia, plus a camera array inside the cabin at the top of the windshield. A single camera is used for traffic-light detection, with stereo units for the driving assistants.

According to Hyundai, the autonomous gear detects objects knee-high but also will not drive into a low-hanging tree branch. We're also told the system works in rain and snow, citing the all-conditions approval certificate from Nevada, though that center front sensor looks prime for snow packing in heavy stuff."

Autoblog also had some interesting impressions on the drive itself:

"The ride experience is drama-free if a bit on the cautious side. Braking is often moderate to heavy, more on/off than the modulation range of many human drivers, but we felt no panic braking or ABS intervention. The steering wheel ratchets through turns in what appear to be three- or four-degree increments, then calculates that's not enough, and adds more or less as needed. That kind of steering movement is a curious thing to watch, and likely not the most energy-efficient or easiest on tires, but it wasn't abrupt enough to transfer lateral motion or head-toss to occupants. Once the car has satisfied itself the road is clear, acceleration to the limit is electric-car crisp, effortless. and quiet."

Hyundai presentation on the autonomous concept:

"The goal of the autonomous IONIQ concept was to keep the self-driving systems as simple as possible. This was accomplished by using the production car’s Smart Cruise Control’s forward-facing radar and Lane Keeping Assist cameras, which are integrated with LiDAR technology.  Hyundai is also developing its own autonomous vehicle operating system, with the goal of using a lot less computing power. This will result in a low-cost platform, which can be installed in future Hyundai models the average consumer can afford.

To showcase its autonomous vehicles in action, Hyundai Motor will debut two autonomous IONIQs at the Consumer Electronics Show (CES) in January 2017 where the cars will be found driving up and down the neon-and sunlit boulevards of Las Vegas. The testing in Las Vegas will build upon the Hyundai’s current efforts to bring the most adept and safest self-driving car to market.

In addition to offering media rides, these IONIQs will be prepared to tackle: