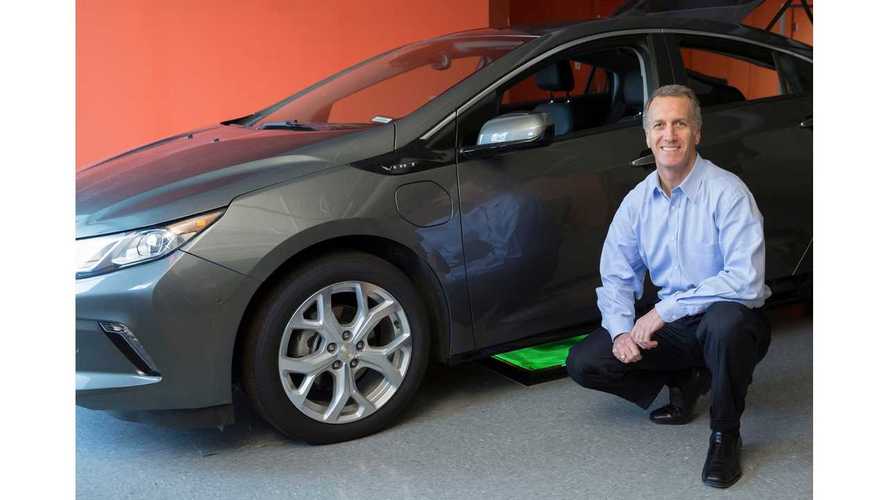 WiTricity has begun joint tests of its wireless charging technology with General Motors.

Two power levels of the WiTricity's Drive 11 park and charge system are under investigation - a 7.7 kW  unit, and also a 11 kW system (both designed with an intention to comply with future standards proposed by SAE International’s J2954 Committee as we understand them today).

Both power levels could be utilized in plug-in hybrids in the future (like the Chevrolet Volt and Cadillac CT6 plug-in) and all-electric cars (Chevrolet Bolt EV).

Given the maximum input charge level for the Chevy Volt is currently 3.6 kW (level 2, no DCFC abilities), the ability to accept either a 7.7 or 11 kW wireless charge would be a huge improvement.

It's too early to said that GM will use WiTricity wireless charging for sure, but if Chevrolet intends to offer autonomous driving technology, the adoption of wireless charging is a major option, that many consider to be required in the package.

"Wireless charging is a technology that our customers have told us they are interested in. By testing the WiTricity prototype system, we can ensure that wireless charging systems will comply with proposed industry standards, which benefits the entire industry and consumers.”

"The electric vehicle has been recognized as central to the future of mobility, and GM has been a leader, making EVs accessible to the broader market. The convenience of wireless charging will help accelerate adoption even further. Our team is proud to work with GM on this project. Wireless charging for EVs, based on industry standards, is inevitable as we move toward a future of self-driving and autonomous vehicles, and this project brings us one step closer to realizing our vision of a world powered wirelessly."

"GM is committed to offering customers a variety of electrification solutions, including a great charging experience. To improve understanding of real world performance and the challenges integrating this technology into vehicles, GM is testing WiTricity’s prototype wireless charging system, which allows a driver to simply pull into his or her garage and automatically receive power from a source below the vehicle. The system design works across all plug-in electric vehicle platforms and can be deployed as a “floor pad” in a consumer’s garage, as well as installed under pavement to provide wireless charging in public and commercial parking lots."

"WiTricity is committed to catalyzing EV adoption through flexible park and charge experiences. The company is working with major automakers and Tier 1 suppliers to bring the next generation of wireless EV charging to a commercial reality. Licensing agreements have been announced with Toyota, Delphi, TDK, IHI and BRUSA. WiTricity is also collaborating directly with leading carmakers to drive global standards for wireless charging systems. Standards initiatives the company is involved in include the SAE International, International Electrotechnical Commission (IEC), International Organization for Standardization (ISO), STILLE and China Automotive Technology & Research Center (CATARC)."