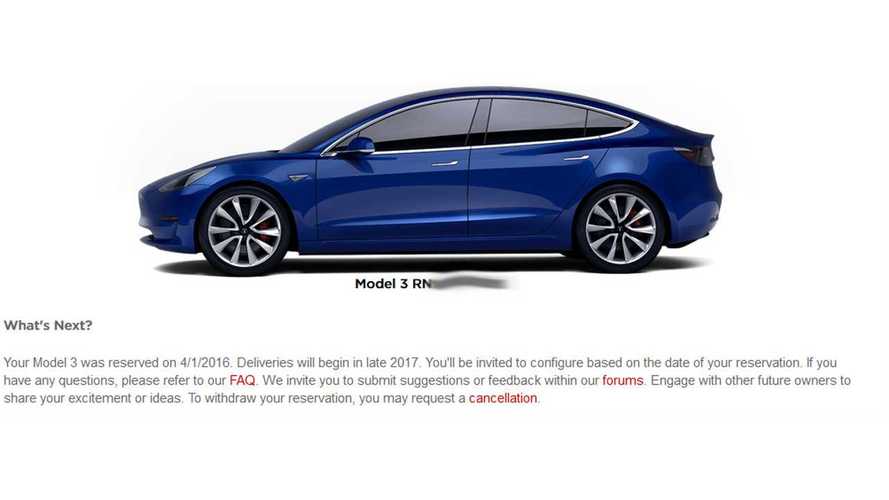 It appears as though Tesla Motors is providing Model 3 reservation holders with their first significant update since putting in pre-orders starting at the end of March.

Upon logging into their My Tesla account, Model 3 reservation holders are receiving this notice:

"Your Model 3 was reserved on 31/03/2016. Deliveries will begin in late 2017. You'll be invited to configure based on the date of your reservation. If you have any questions, please refer to our FAQ. We invite you to submit suggestions and feedback within our forums. Engage with other future owners to share your excitement or ideas. To withdraw your reservation, you may request a cancellation."

No real news there, other than Tesla re-confirming late 2017 for first Model 3 deliveries.

As for the "late 2017" note, as far as we can tell, the emails are generic to all reservation holders and don't reflect places in line.  Earlier this month, Tesla CEO Musk himself set a supplier target for Model 3 components for production on July 1st (a date he himself doesn't believe will be achieved):

"So in order for us to be confident of achieving volume production of Model 3 by late 2017, we actually have to set a date of mid-2017 and really hold people’s feet to the fire internally and externally to achieve an actual volume production date of late 2017.”

Regardless to the late calendar year start, Musk still hopes Tesla will produce up to 200,000 cars in 2017.

"This is the first time we see the Model 3 officially in color blue. Furthermore, Tesla will notify its future customers when they can start configuring their vehicle based on the date of their reservation. And finally Tesla has added a link where reservation holders can cancel their order."

Approximately 373,000 pre-orders have been placed for the Model 3.  Even at the end estimate of 100,000 units into production in 2017, it will take awhile before Tesla fulfills all orders, but its still preferable to have a huge backlog, rather than little to no interest at all.