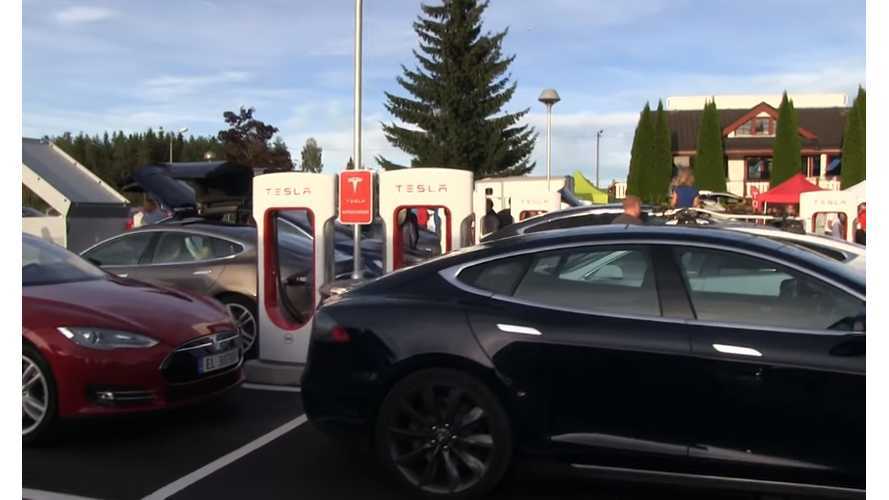 Thankfully there was a lot of great coverage that we can share, as Norsk elbilforening (who send us along a lot of great shots) and Bjorn Nylund (with some on the scene video) where both at the event.

The station is a joint project between Tesla and Fortum Charge & Drive, with representatives on hand from both outfits - Tesla's country manager Pål Simonsen, and Fortum manager Jan Haugen Ihle, as well as secretary general Christina Bu of the Norwegian EV Association (Norsk elbilforening).

"Today we represent more than 35,000 EV owners, making us the biggest EV owners organization in the world. More than 3,000 of those drive a Tesla, the rest drive a large selection of different models and makes. I think it´s wonderful to get a fast charging station where a total of 28 EVs are able to fast charge at the same time" said Secretary General Christina Bu.

...and also the first overcrowding of EVs at world's largest fast charging station (via elbil.no)

The station is located at Nebbenes, which is 45 minutes north of Norway’s capital of Oslo.

20 Tesla Stations, 4 50 kW DCFC And 4 22 kW (AC) Points Give Norway The Title Of Having The Largest Fast Charging Station In The World (via elbil.no)

"I would also like to thank all Tesla owners. Our mission would have been impossible without you. And I am pretty sure that this Supercharger has been the most requested lately. We have been pushed quite hard, and we try to comply with your wishes as best we can. Our single most important task is to accelerate the world´s transition to sustainable energy, and we are doing it through devoted ambassadors like you. This is our next step, and we are very proud to take it with you." - Tesla country manager Pål Simonsen said.

Our congrats to Norway on the achievement, and hope to see more large, multi-standard fast charging stations like this one around the world soon!

Additional coverage and quotes can be found at elbil.no