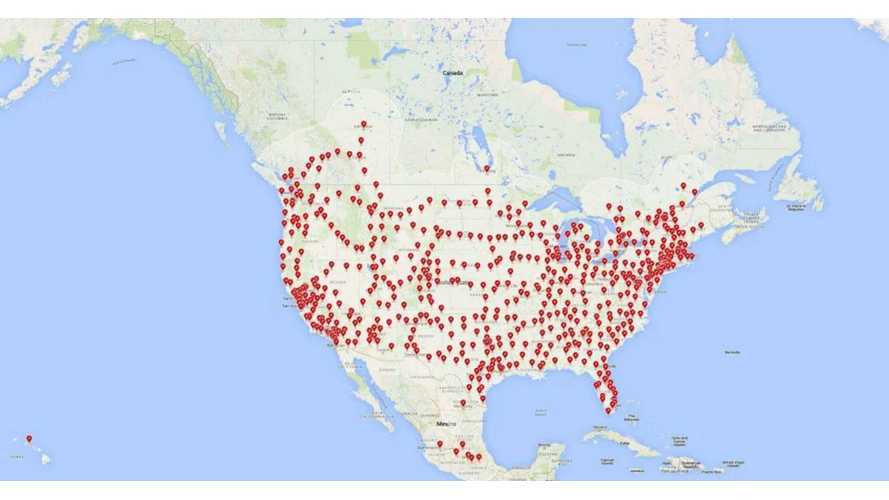 Many people have pointed out as of late that the Supercharger maps found on Tesla's website didn't exactly depict the true state of the network.

This is not to say that Tesla is showing stations that don't exist or aren't active, but instead, many stations have sprouted up around the globe and were not showing on the map, while at the same time many of the projections Tesla made in the past for the net new number of Supercharging stations - have failed to be realized.

Overall, it just seemed like the map hadn't been updated/cared for in quite some time.

The good news is, Tesla has now updated the current maps for accuracy (and we no longer have to view the 'planned for 2016' maps that clearly weren't going to happen), these are now referred to as 2017 maps, and at the same time, the company unveiled its "new" 2017 Supercharger expansion plans.

*You can check out all of the maps here

Here is animation showing the planned 2016 vs planned 2017  map (special thanks to InsideEVs reader Scott F!):

Tesla had already made expansion plans clear earlier in the year, but the company has thrown out such plans and started fresh. Tesla didn't meet the plans as previously shown, thus plans have changed. Perhaps Tesla was waiting on the close of the year, to avoid discrepancies between "current" 2017 Superchargers (already in place, as the company has completed a myriad of stations in a very short time, over the past few weeks), and "planned" 2017 Superchargers.

Nonetheless, the plans are public now. Tesla will have new Superchargers in Hawaii and Mexico. Expansion in North America will continue in the U.S. and Canada, however, with another whole year to move progress, the plans include larger scale expansion.

The story is a bit different for the Europe and Asia-Pacific plans and maps. Unlike the new plans to further expand North America, beyond earlier projections, these other areas will see plans stay primarily intact. However, obviously now pushed back from original intentions.

Tesla has nearly 800 Supercharger locations worldwide, approaching 5,000 Superchargers. Expansion plans for 2017 intend to almost double the current numbers. This is a necessity due to the Model 3 hitting roadways in the middle of next year. Tesla's expansion plans for the following year will have to be even more aggressive as in 2018 we should see full-fledged Model 3 production. This also means that the company will be in dire shape if it falls behind with 2017 plans as it did in 2016. There is much less room for missing goals at this point.