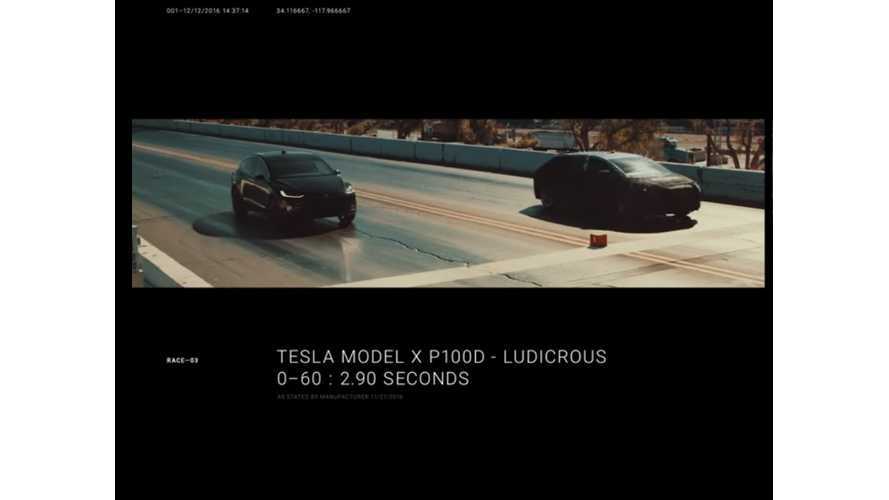 Last week, as part of the company's recent teaser marathon for its upcoming production-intent, all-electric vehicle debut in Las Vegas on January 3rd, Faraday Future released a partial video of one of its prototype mules racing a Ferrari, a Bentley and also a Tesla Model X.

And while the race results were not shown at the time, one naturally assumed that the Faraday Future EV bested the field (otherwise it would have been a fairly crappy teaser to publish in the first place).

Today, Faraday has uploaded the full race, indeed showing its EV taking down all comers.

And that Tesla Model X in question?  Yupe, it was a P100D with Ludicrous mode according to the company.

"Our software provides a competitive advantage that others don't have.

We are going to do a little better - because there is more in there."

Faraday says that it will be bring live demonstrations of the EV's performance to CES next month.

"We put our powertrain to the test against a Bentley Bentayga, a Ferrari 488 GTB, and a Tesla Model X P100D Ludicrous.  #FirstForward and first across the finish line.

The company may well indeed have produced a faster/better product, but even before we see what that product is, questions surrounding the funding of Faraday just keep popping up, as even today Buzzfeed reports that the company is in "turmoil", and is at the center of not one, but two recent lawsuits claiming unpaid bills.

Buzzfeed on the situation:

"...six former Faraday employees told BuzzFeed News the company is headed toward its big CES reveal following a year fraught with financial troubles, including mounting unpaid bills, lawsuits from a supplier and a landlord, and a distracting side project undertaken at the behest of its largest investor. The past year has also seen a slew of departures, including senior staffers."

According to the report, Auto supplier Futurius claims $10 million owed, and Beim Maple Properties (a property owner in California) that says Faraday has missed almost $105,000 in rent payments for a warehouse.  To say nothing of the stop-work order AECOM has put on Faraday's Nevada factory due to an outstanding bill of some $57 million.

Reportedly, Faraday Future has secured up to $600 million in new funding as November 22nd, but as of yet no sign of that money arriving to put out any financial fires.

Hopefully, they can get things sorted out, and we will actually see these uber-high performance EVs come to market.  An impromptu race between a 2.4 second to 60 mph Tesla Model S P100DL, a 1,000+ hp Lucid Air (recently debuted) and a Faraday Future supercar would be sight to see!

to the big, production-intent reveal of its high performance EV in Las Vegas ahead of CES on January 3rd, 2017