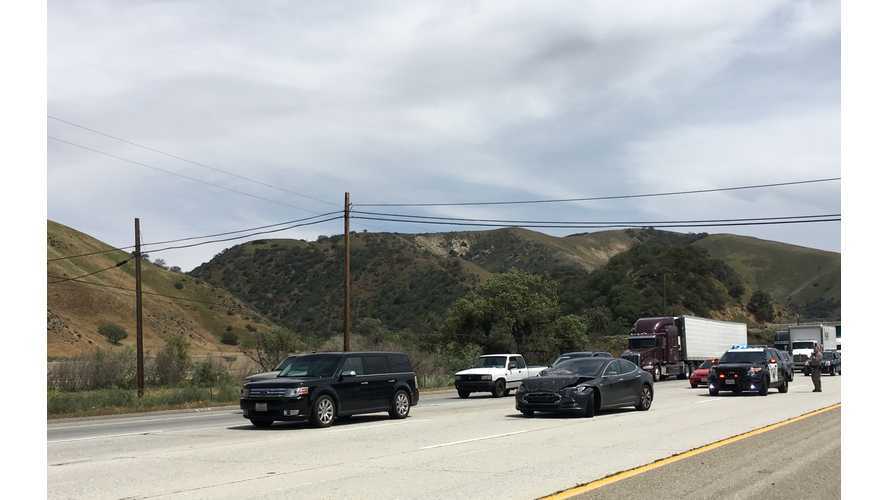 Since releasing Autopilot, Tesla has reminded drivers that they must remain alert and at-the-ready at all times. Autopilot does not imply that the driver can rely on the car to do all the work, yet some Tesla owners like to think that the system is flawless and that it will prevent all wrecks.

Her story, as told by Ars Technica, goes like this:

"On April 26, Simpson was driving north from Los Angeles on I-5, cruising in autopilot mode. "All of a sudden the car ahead of me came to a halt. There was a decent amount of space so I figured that the car was going to brake as it is supposed to and didn't brake immediately. When it became apparent that the car was not slowing down at all, I slammed on the brakes but was probably still going 40 when I collided with the other car."

Tesla says that is not what happened, and once it again it has the vehicle logs to prove it. Tesla says this is how it all went down (via Ars Technica):

"...Tesla says that the vehicle logs show that its adaptive cruise control system is not to blame. Data points to Simpson hitting the brake pedal and deactivating autopilot and traffic aware cruise control, returning the car to manual control instantly. (This has been industry-wide practice for cruise control systems for many years.) Simpson's use of the brake also apparently disengaged the automatic emergency braking system, something that's been standard across Tesla's range since it rolled out firmware version 6.2 last year."

So, Simpson deactivated the system that would've likely would have prevented the wreck, and yet still wants to blame the crash on Tesla it seems.

Tesla released this statement on the matter:

"Safety is the top priority at Tesla, and we engineer and build our cars with this foremost in mind. We also ask our customers to exercise safe behavior when using our vehicles. Since the release of Autopilot, we’ve continuously educated customers on the use of the feature, reminding them that they’re responsible for remaining alert and present when using Autopilot and must be prepared to take control at all times."

"Tesla Autopilot is designed to provide a hands-on experience to give drivers more confidence behind the wheel, increase their safety on the road, and make highway driving more enjoyable. Autopilot is by far the most advanced such system on the road, but it does not turn a Tesla into an autonomous vehicle and does not allow the driver to abdicate responsibility."

Fortunately, nobody was seriously injured in this incident.