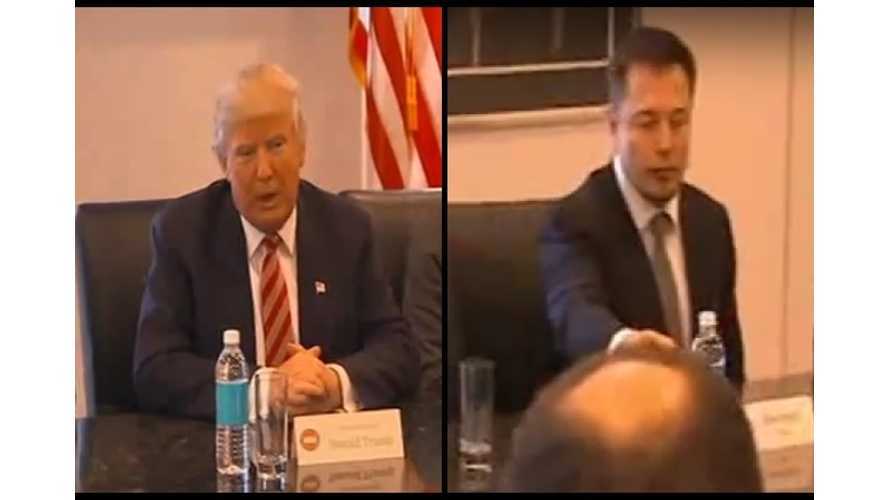 Happening now, President-elect Donald Trump is meeting with the who's who of the tech industry for a special summit on jobs and how to make trade easier.

As mentioned earlier, in attendance is Tesla's Elon Musk who has just been named to the President's advisory council.

Reportedly, Mr. Musk and also Apple CEO Tim Cook will be 'staying after class' for a special smaller (and more private meeting) with the future President.

The small group dynamic should be more than interesting, especially in regards to the Apple Chief and his interactions with Trump, as the two have had a very rocky relationship up until now.

Here one can check out the first few minutes of the meeting, which we have to say, seems a touch awkward.

Trump soothed the room with positive vibes to kick things off saying,

Trump noted that many "huge" companies wanted to be in attendance, but didn't make the cut, although the President-Elect's kids did.

"There's nobody like the people in this room, and anything we can do to help this go along we’re going to do that for you.  You call my people, you call me, it doesn’t make any difference. We have no formal chain of command."

Once over, we'll have some follow-up just how things went and what specifically was discussed.

It seems all the tech executive's left the meeting with only positive things to say, as President-Elect Trump had a conciliatory tone - perhaps to mend some broken fences from earlier during the election

Not a lot of specifics details were released, but sources say that Trump had a "conciliatory tone" to the proceedings that lasted about 90 minutes with the various technology leaders.

According to Trumps transition team the meeting touched primarily on job creation, but also stretched to corporate tax cuts, manufacturing and trade in China, tax cuts, repatriating foreign assets, as well as regulations that prevented US businesses from doing business overseas.

Also, the meeting of the select group may not be a "one-off" as originally anticipated.  In fact, it could meet as often as quarterly...although we suspect many of the high-powered execs looked at this first invitation as a must-attend to show good faith; meaning regular meetings likely would not be as well attended.

Amazon boss Jeff Bezos, one of Trump's adversaries during the campaign (saying Trump “erodes democracy around the edges" after the President-Elect accused Bezos of buying the Washington Post to shape politics in the US), seemed to come away from the meeting positively.

“I shared the view that the administration should make innovation one of its key pillars, which would create a huge number of jobs across the whole country, in all sectors, not just tech - agriculture, infrastructure, manufacturing.  Everywhere.”

Trump's pick for commerce secretary, Wilbur Ross, told the media afterwards (via the WSJ) that the summit was “constructive” and that “both the tech guys and the administration got to know each other a lot better.”

I love that everyone at the start of this meeting went around and introduced themselves. Like "hi in case you didn't know I'm Elon Musk"