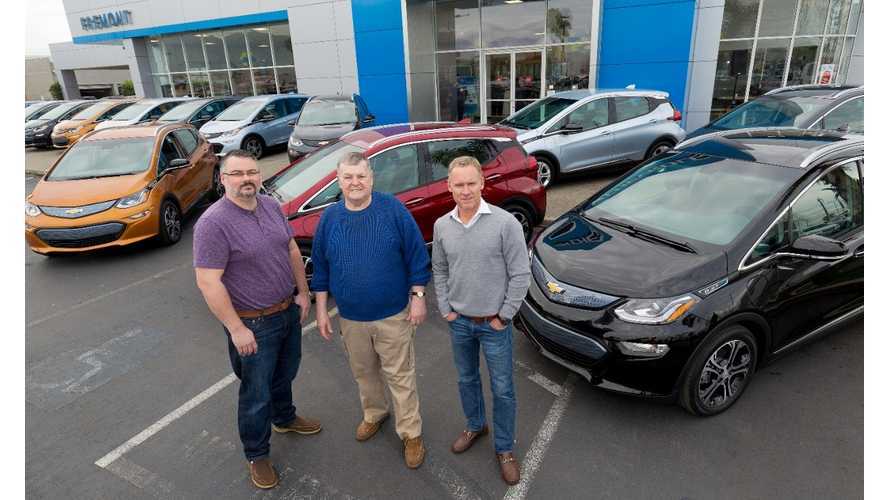 Two years after the Chevrolet Bolt EV concept debuted in Detroit, GM has fulfilled its promise to not only price the all-electric car under $30,000 with incentives, give it more than 200 miles of range (238 to be exact), but to begin retail sales of the car before the close of this year.

Today, Chevrolet has announced the the first three Bolt EVs were delivered in the San Francisco Bay area.

Just two years ago in Detroit, we waited impatiently for the cover to be pulled of GM's future affordable EV

“All of the hard work that the Chevrolet team have put into designing, engineering and building the Bolt EV brings us to this truly satisfying moment of making the first deliveries to customers on-time, as planned,” said Alan Batey, president of GM North America and Global Chevrolet brand chief.

“Chevrolet is proud to offer a vehicle like the Bolt EV, with ground-breaking technology wrapped in a modern design that is also fun-to-drive at an affordable price.”

At the same time the company gave us a mini-update on the new roll-out schedule for the Bolt EV:

Once again using our 'OEM secret-decoder ring', we assume that when GM states the nationwide release of the Chevy Bolt EV will be mid-2017, what they actually mean is that the 2018 model year Bolt EV (expected to arrive around August of 2017) will be a national product offering.

Separately, the Bolt EV arrives in Canada in "early 2017" for Ontario, Quebec and British Columbia, with the nationwide release there planned "within twelve months of the retail launch" - so once again, model year 2018s.

Chevrolet Bolt EV: On Budget, On Range...and maybe just as importantly, on time!

GM also took the time to highlight the "who" of the ceremonial first three deliveries (as now the mass release of the Bolt EV is underway to the public with the release of this news).  According to Chevrolet, the first recipients are:

And we can't help but notice these deliveries were made at Fremont, Chevrolet...right in the backyard of another major EV maker that goes by the name of Tesla.

Interestingly, the quote-of-interest that GM chose to highlight puts the spotlight on the BMW i3 as a trade-up story, expressing both a superior range for the Bolt EV and its American-built qualities.

“The range and technology attracted me to the Bolt EV,” says Bobby Edmonds. “It’s also a great-looking, roomy vehicle and I love the fact it’s from an American brand. I look forward to the longer drives I can make compared to the i3 that I owned.”

Now, the only question is how many can GM deliver for December, and will that number reach the all-time "debut month record" for EV sales recently set by the Toyota Prius Prime in November with 781 deliveries?

Past 2016, we see an exciting 5-way race developing for 2017 plug-in sales champion in the US between the Chevrolet Bolt EV, Tesla Model S, Chevrolet Volt, Nissan LEAF and Toyota Prius Prime (maybe 6 depending on Tesla Model 3 timing)... anyone care to go on record with their 1 through 5 pics today?