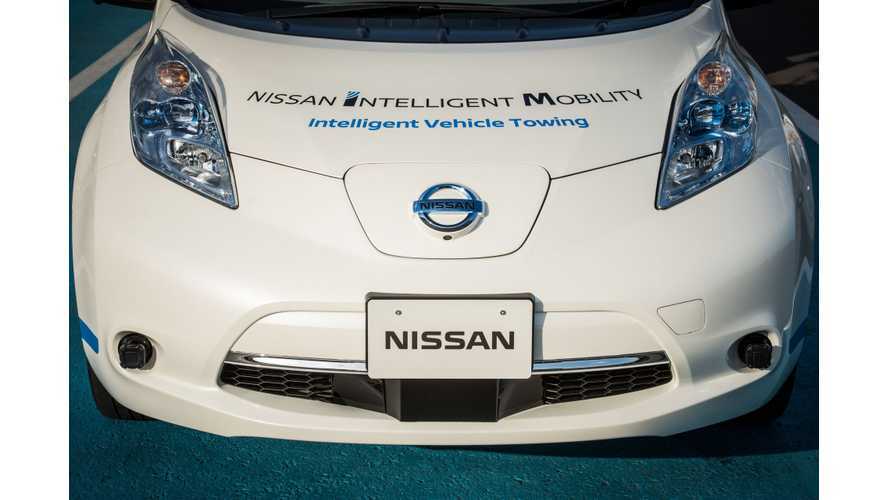 Earlier we heard from the CES press core (one of the largest consumer electronics and consumer technology tradeshows going) that Nissan's CEO, Carlos Ghosn, would be giving a keynote speech on opening day - Thursday, Jan. 5, 2017 at 5PM (PT) at the Westgate Theater in Las Vegas.

The topic 'du jour' was on electric vehicles and a "major technological breakthrough in the realization of a zero-emission, zero-fatality world for everyone".

Says CES of the event:

“In his first appearance at CES, Ghosn will unveil a vision of the world made better by the latest automotive technology innovations. In his role as leader of The Renault-Nissan Alliance, one of the world’s largest automotive groups, Ghosn will share space-age advances that significantly alter our understanding of how our world will evolve.”

Now Nissan  has started to ramp up its own press machine for Ghosn's appearance.

Earlier this week, we had a demonstration of first gen LEAFs hauling other new LEAFs around autonomously at the company's Oppama assembly facility (see also video below), and now we are apparently going to see the next generation of Nissan's vision for autonomy applied in Las Vegas, with CEO Ghosn doing the MC duties.  Nssan teases us to "see what is next" at CES.

The company adds this sentiment...whatever it means.

"Nissan has always been a dreamer as well as a doer."