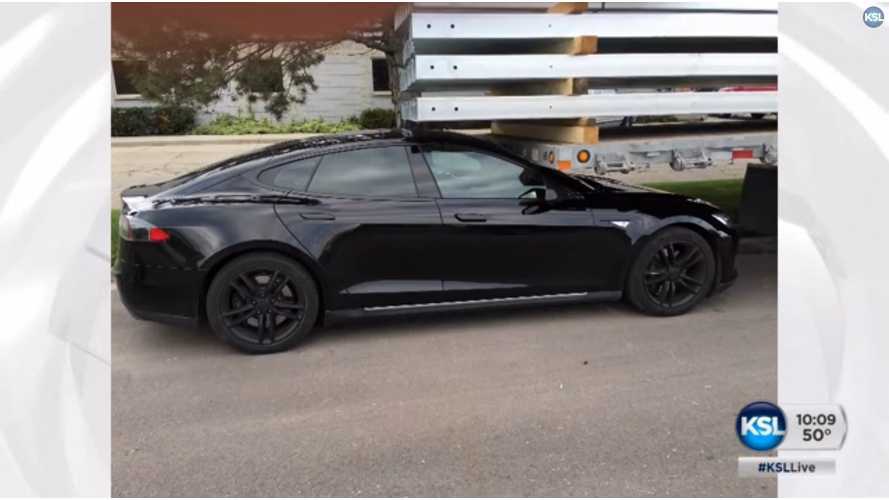 A Utah County Model S owner is stating that his Tesla Model S decided to take a joyride on its own, and crashed into the back of a trailer, via a report from KSL.

According to the owner - Jared Overton, he states he was running errands on the 29th of April and parked his car far behind a trailer near 400 North and 1030 West in Lindon, when someone (a worker at the establishment) stopped to ask him about the car.

“You know, Tesla’s kind of a flashy car — he’d never seen one in person,” Overton said to KSL

Then Overton says a good 20 seconds to a minute passed outside the vehicle after talking to the worker, before the two went inside the business. When he returned 5 minutes later, he found his Model S had impacted the trailer, all on its own.

“We were trying to figure out how on earth the vehicle started on its own,” Overton said. “What happened with this kind of rogue vehicle?”

Mr. Overton reported the incident to Tesla, and the company sent him a letter backing stating that it was driver/owner error:

“Tesla has reviewed the vehicle’s logs, which show that the incident occurred as a result of the driver not being properly attentive to the vehicle’s surroundings while using the Summon feature or maintaining responsibility for safely controlling the vehicle at all times."

The letter went on to state specifics of the incident, that three seconds after exiting the car, the Summon function initiated.

Another Look At Model S Impact With Trailer (via KSL)

In a classic "man vs car vs computer log" scenario, Overton disputes the findings:

“Even during that 15, 20 second walk right here, we would have easily heard the impact of the vehicle into the back of the trailer.  They can tell me what they want to tell me with the logs, but it doesn’t change what we know happened here....They’re just assuming that I sat there and watched it happen, and I was OK with that."

KSL did get in contact with Tesla, and the company issued a statement Tuesday night noting that the Summon feature is currently “in beta", but not directly addressing this event.

“...It is paramount that our customers also exercise safe behavior when using our vehicles — including remaining alert and present when using the car’s autonomous features, which can significantly improve our customers’ overall safety as well as enhance their driving experience.”

Tesla's statement also noted that the owner must agree to terms on their touch screen before the summon feature is enabled.

“This feature will park Model S while the driver is outside the vehicle. Please note that the vehicle may not detect certain obstacles, including those that are very narrow (e.g., bikes), lower than the fascia, or hanging from the ceiling. As such, Summon requires that you continually monitor your vehicle’s movement and surroundings while it is in progress and that you remain prepared to stop the vehicle at any time using your key fob or mobile app or by pressing any door handle. You must maintain control and responsibility for your vehicle when using this feature and should only use it on private property.”

The Model S owner and Tesla now seem to be at an impasse as to the cause of the crash, but KSL does note that Overton is currently driving a Tesla loaner as his car is being repaired, and would like Tesla to have a closer look at his situation so it doesn't occur to anyone else again.

Assuming this was a summon mishap of some kind, earlier this year Tesla updated its summon-feature to make its operation safer, after an issue was pointed out by Consumer Reports. Previously, a single button push on the keyfob or smart phone could initiate the function.

The update saw smart phone operation require constant contact with the engage button to continue the summon operation (ala deadman's switch), while the user could no longer Summon the car with the keyfob (only stop the operation) - that is unless they set it up themselves to override the safety protocols after proceeding through numerous warnings.