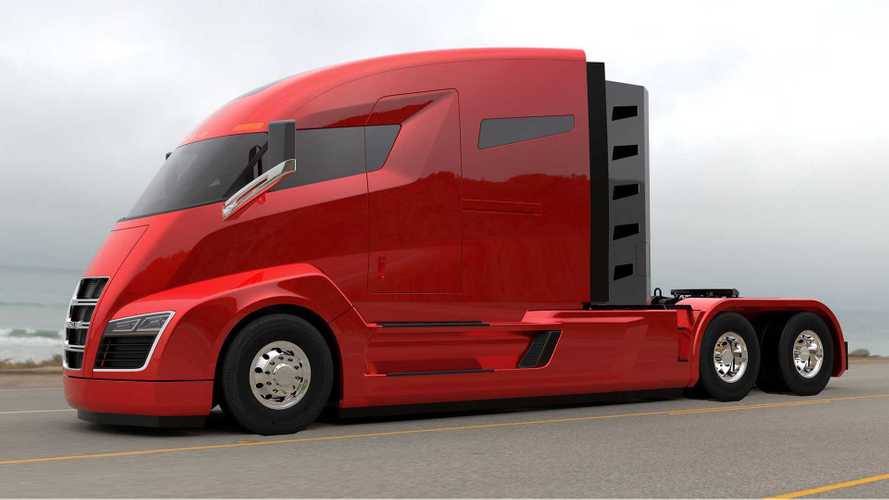 A new electric start-up, Nikola Motor Company emerged from the stealth mode on May 10, 2016.

The name was borrowed from the Nikola Tesla, the same inventor who inspired Tesla Motors.

Nikola Motor Company (for friends "Nikola"), comes with an idea to offer the first electric-driven/plug-in hybrid (although Nikola states plugging it in is optional) class 8 semi-truck, called the Nikola One.

The second entry will be the Nikola Zero - or the "most powerful production model UTV ever built".

According to the press release, Nikola One will be capable of pulling a total gross weight of 80,000 pounds and offering up to 1,200 miles between stops.

1,200 miles is beyond the reach of any semi-truck, unless it hauls batteries instead of cargo, so Nikola opts for 320 kWh battery and turbine, which will power a generator to power wheels/recharge batteries.

Reservations are only $1,500, and there is good news that the first 5,000 orders qualify to receive free CNG fuel for first million miles.

"The fuel will be delivered through Nikola’s own gas wells and fueling stations in every state when trucks enter service. We will be the first manufacturer of class 8 trucks that is vertically integrated from well to wheel."

The Nikola One’s electric motors are powered by a liquid cooled 320 kWh, lithium-ion battery pack (over 30,000 lithium cells), which is charged by a proprietary onboard Nikola Motor Company turbine. The turbine automatically charges the batteries when needed and eliminates the need to ever “plug-in”. The turbine produces nearly 400 kW of clean energy, which provides ample battery power to allow the Nikola One to climb a six percent grade at max imum weight at 65 mph. A typical class 8 diesel truck under similar conditions would have a hard time reaching 35 mph. And going downhill, the Nikola One’s six electric motors absorb the braking energy normally lost and deliver it back to the batteries, increasing component life, miles per gallon, safety, and freight efficiencies while eliminating noisy engine brakes and reducing the potential for runaway trucks.

More details about Nikola One here.

"The Nikola Zero has a single 155 hp electric motor at each wheel (4x4), generating 520 horsepower in total, and producing 0-60 acceleration times around three seconds. Jointly engineered with world renowned Pratt & Miller Engineering, the Nikola Zero was designed from the ground up to beat all competitors, in every terrain, all year round. Most of the Nikola Zero’s components sit at or below the frame rail, thereby lowering the center of gravity and improving anti-roll over capabilities compared to most other UTV’s. This was accomplished by removing the gasoline engine, clutch and emission equipment. Benefits of removing the gasoline drivetrain include: increased suspension travel, better handling, reduction in greenhouse gas emissions, quieter ride and no belts or clutches to fail. Once drivers get behind the wheel of the Nikola Zero, the instant power and performance will be like nothing else ever experienced."