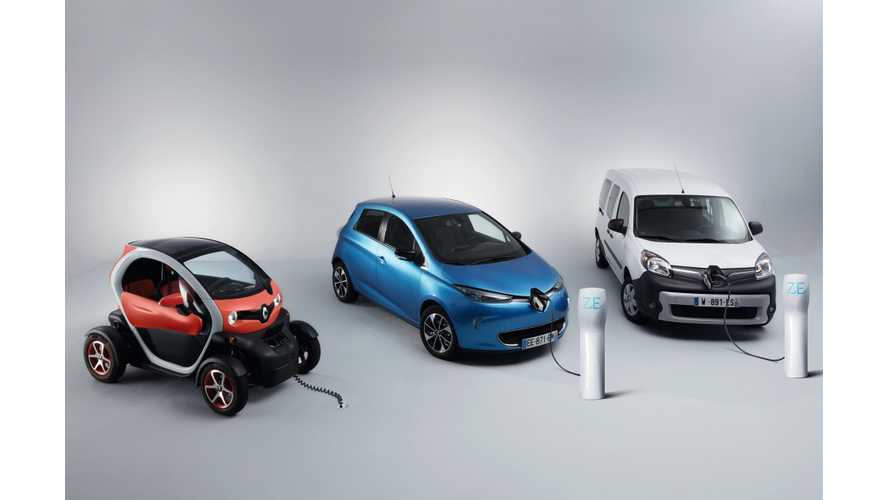 Renault announced that as of January 1st, 2017, Gilles Normand (earlier Renault Senior VP and Chairman of the Asia-Pacific region and member of the Renault Management Committee) will become the Senior VP of Electric Vehicle.

Not that exciting of news to be frank.

However, the press release on the hierarchy change also includes a commitment to develope  new affordable electric car.

It's possible that Renault could be referencing a cheap EV for China, but we doubt it would be tucked into this Eurocentric release.

There is also a chance for an EV introduction of a new EV based on the Renault Twingo, which still awaits its chance at becoming an EV - not counting the Twingo-based smart forfour electric drive vehicle that will be released in early 2017 in Europe only (the new fortwo arrives in the US in a few weeks time).

This year Renault hopes to sell around 30,000 electric cars (including the electric quadricycle Twizy) - 24,000 of them to fall on the ZOE.

Reanult's current EV lineup includes the ZOE, Kangoo Z.E. van and Twizy, as the Fluence Z.E. faded away about a year ago.

The new electric model could also be loosely based on the Renault KWID, of which a Z.E. ready concept was shown off three years ago.

"Groupe Renault is leader of the electric vehicle market in Europe, with 25% market share. Since 2012, Renault has sold more than 100,000 EVs.

A major advancement in September 2016 saw the presentation of a new Renault ZOE equipped with ZE.40 battery, allowing it to reach a record 400 km homologated range. Groupe Renault is also working on a new affordable EV model."

“I am very motivated by this new strategic challenge at a time when the Global EV market is entering into a significant growth phase. I look forward to working with the team to continue to drive our leadership in existing and new markets, and bring exciting EV vehicles to our customers”.