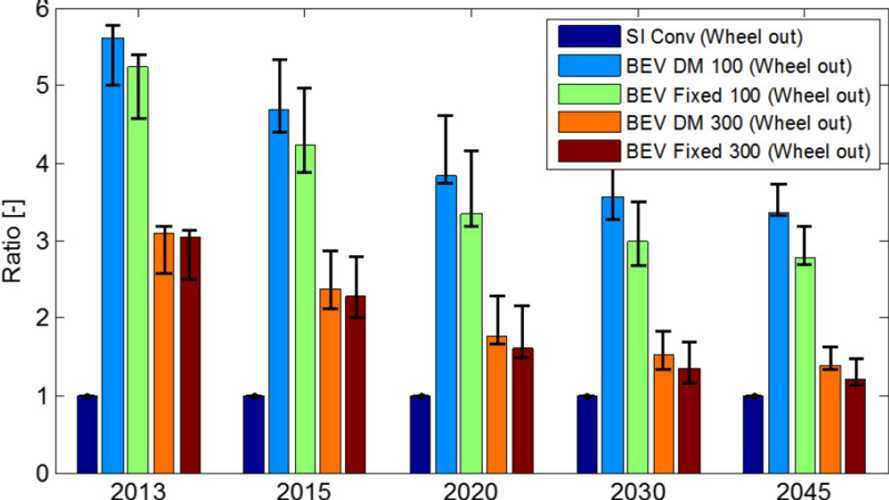 As one might expect, liquid fuel is found to store a tremendous amount of energy in each unit of weight, but interestingly most of the energy is still wasted in the end.

Assuming improvements in battery technology, as well as in electric motors/power electronics, ANL's team expects that by 2045 BEVs with 300 miles of range (and single speed-transmissions) will have power train energy density on par with petrol vehicles (also including some improvements like start-stop systems).

"By 2045, BEV 300s will be comparable to conventional vehicles in terms of the energy spent at the wheel per kg of the powertrain mass."16

Such an analysis often shows that the batteries are at least an order of magnitude behind fuels like gasoline. However this incomplete analysis ignores the impact of powertrain efficiency and mass of the powertrain itself.

When we compare the potential of battery electric vehicles (BEVs) as an alternative for conventional vehicles, it is important to include the energy in the fuel and their storage as well as the eventual conversion to mechanical energy.

For instance, useful work expected out of a conventional vehicle as well as a BEV is the same (to drive 300 miles with a payload of about 300 lb). However, the test weight of a Conventional vehicle and BEV will differ on the basis of what is needed to convert their respective stored energy to mechanical energy. This study provides a fair comparison of technologies to report the real status of battery electric vehicles when compared to their gasoline-powered competitors."