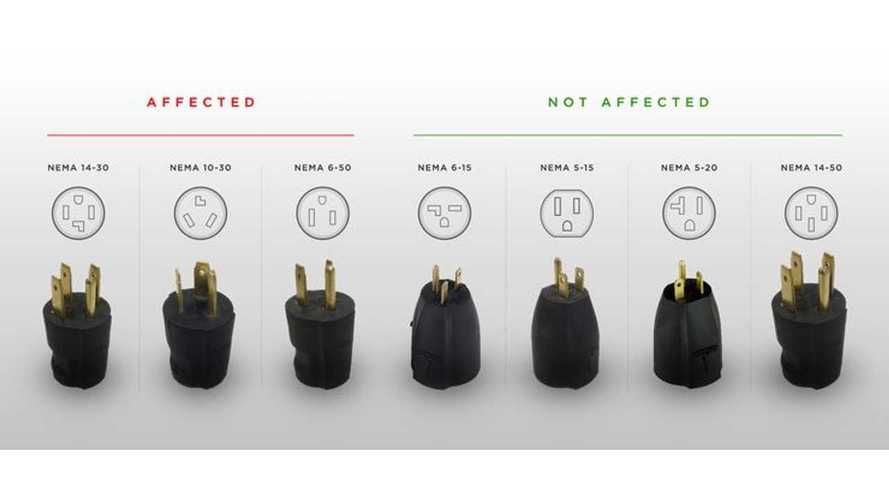 Tesla Motors has issued a voluntary recall of 7,000 charging adapters.

The recall comes after two Tesla owners reported overheating of the affected adapters back in November.

"Two customers reported overheating in November, according to an e-mail the company sent to customers Tuesday. No damage besides the melted plastic was reported, and Tesla said it has notified U.S. regulators of its voluntary recall. The accessories were manufactured by an outside supplier and haven’t been sold for at least six months, according to Tesla."

Both cases involved the NEMA 14-30 adapter, which is typically used to charge a Tesla via a clothes dryer plug in the U.S. Tesla says international owners are not affected by this recall.

Tesla issued this statement on the matter:

Because safety is our top priority at Tesla, we want to inform you of an action we’re voluntarily taking to recall a small number of charging adapters.

This recall does not involve the Tesla Wall Connector, Universal Mobile Connector, NEMA 14-50 adapter, or NEMA 5-15 adapter that came standard with your Tesla and that most of our customers use for charging. It only involves NEMA 14-30, 10-30, and 6-50 adapters, which are sold separately as accessories and which are used by relatively few of our customers.

In November 2016, we learned about two customers whose NEMA 14-30 charging adapters overheated. These are the only two such incidents that we know of anywhere in the world and neither resulted in any injuries or property damage. However, out of an abundance of caution, we’re replacing NEMA 14-30, 10-30 and 6-50 adapters that were made years ago by our original supplier.

Although there have been no incidents with NEMA 10-30 or 6-50 adapters, they have some common elements with the NEMA 14-30, so we will be replacing those as well. These replacements will take about three months to develop and manufacture. In the meantime, since none of these adapters has ever overheated, you can continue to use them if you do not have another way to charge your car.

If you need additional assistance, you can also contact us by phone at 877-798-3752 or by email at ServiceHelpNA@teslamotors.com.

Are any of the standard equipment adapters affected? No, only 14-30, 10-30 or 6-50 accessory adapters purchased separately are impacted by this recall. The 14-50 and 5-15 adapters included with your Tesla are not affected.

Are the adapters made by Tesla? The adapters were designed by Tesla and produced by a supplier.

What will Tesla do with the old adapters?

Tesla will recycle materials from the returned adapters.