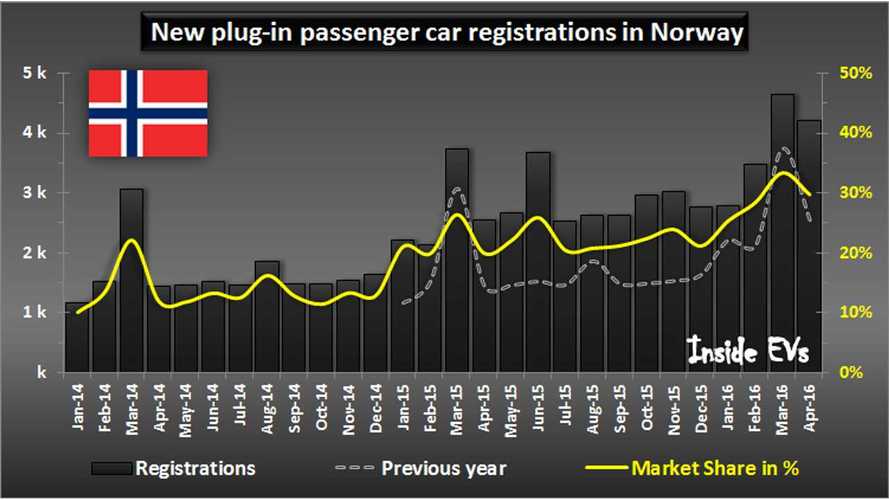 Not-far from a record, 4,215 passenger plug-in electric cars were registered in April in Norway, which is 65% more than year ago.

Despite the high volumes, new passenger all-electric car sales have actually decreased so far this year - from 9,179 to 8,418.  Earlier, March brought a 23.5% decrease, whereas the three other months have been about even.

Plug-in hybrids on the other hand exploded in April, by some 280% year-over-year - with the new incentive system in place, it seems that soon they will surpass BEVs.

On the individual model registrations we saw 541 Nissan LEAFs arriving into Noway; the LEAF is now the third most popular model in Norway overall (petrol included) with a 3.8% market share after four months. Still, first place solidly belongs to the Volkswagen Golf (although we are still unsure of the e-Golf share for April).

Tesla Model S slowed down to just 96 in April and 801 so far this year (likely electing to hold production/deliveries back, not wanting to deliver non-refreshed editions while they are available in the US), which is weak compared to 1,762 year ago and 2,227 two years ago after four months.

We don't expect Tesla sales to improve too much in May (as shipping lead times are as much as ~8 weeks), but for the resurgence to start in June, with Model X deliveries carrying the load in the second half for Norway.