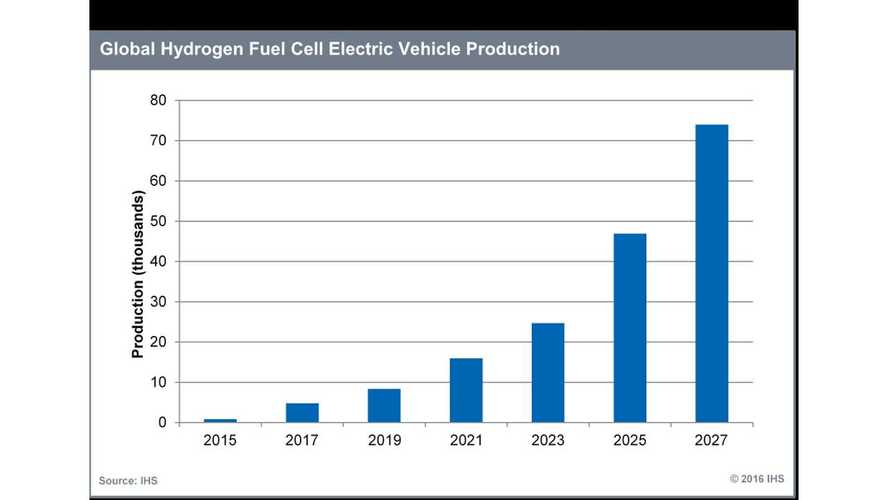 IHS Automotive in its new report on hydrogen fuel cell vehicles, forecasted that in around 11 years, by ~2027, the market for FCEVs (or FCV) will reach more than 70,000 vehicles annually.

To be honest, it doesn't sound like good news for all those standing behind FCEV technology, and the forecast for 70k FCVs is about ~6,930,000 units behind the average plug-in vehicles estimates for 2027.  Although that 100:1 ratio would be superior to 2015.

IHS expects that by 2027 there will be 17 FCEV models on the market - about half the current number of BEV/PHEVs available in US and Europe today.

Ben Scott, senior analyst with IHS Automotive said the time is now for fuel cell technology to take-off or go away forever as anything other than a niche offering:

“Recently there has been an increasing focus on battery electric vehicles and battery technology, but FCEVs could also play a key role in zero-carbon mobility. We are now in the third wave of FCEVs from OEMs and more Hydrogen Refueling Infrastructure is beginning to be rolled out,” he said.  “This could be a ‘now or never’ situation for FCEVs in mass market mobility.”

The difficult problem of FCEV commercialization becomes even more difficult when we add in the non-existing refueling infrastructure. Today, a decent-sized hydrogen station, capable of fulfilling mass demand can cost over $3 million.

According to IHS, hydrogen itself will be more expensive as its production shifts from fossil fuels (96% of production today) to renewable sources. In simple words, there is risk that the cost of hydrogen to drive each mile could be higher than even conventional fuel.

There are only three FCEVs currently available for consumers to purchase/lease; Toyota Mirai, Hyundai ix35/Tucson and the Honda Clarity, all of which are only available in select markets. However, during the next 11 years, the number of available FCEV models is expected to jump to 17, as more OEMs add FCEVs to their product portfolios, IHS says. As expected, in the near-term, most FCEV production is expected to be in Japan and Korea, but by 2021, European FCEV production will take the lead globally. This indicates a shift in regional momentum for FCEVs as OEMs look to meet emissions targets. However, by 2027, FCEV will only represent less than 0.1 percent of all vehicles produced, according to IHS Automotive forecasts.

Many comparisons are made between Battery Electric Vehicles (BEVs) and FCEVs. Current generation FCEVs share similar benefits to conventional cars; short refueling times and long range. Most BEVs on the road today do not have these advantages. “Refueling habits with an FCEV will be very similar to that of a conventional car. This will definitely help with customer acceptance of FCEVs,” Scott said.

Battery technology is improving each year, with $/kWh decreasing, while energy density increases. Although hydrogen has the advantage in terms of refueling times and range, battery technology is catching up. Until this happens, the FCEV market has a window of opportunity to establish itself as a serious contender in long term zero-carbon mobility. IHS analysts say. If the FCEV market has not reached this stage in the next 20-25 years (i.e., moved past the early adopter phase), then FCEVs will remain only in niche applications.

There is already a very well established hydrogen market, but 96 percent of all hydrogen produced is derived from fossil fuels (brown hydrogen), the feedstocks being natural gas, liquid hydrocarbons and coal. For truly sustainable, zero-carbon mobility, the hydrogen used to refuel FCEVs needs to come from renewable sources (green hydrogen). This can be achieved using an electrolyzer and electricity from a renewable source (solar PV, wind turbine etc.). However, the cost of green hydrogen will come at a premium compared to hydrogen from an existing plant, like a steam methane reformer. “There is no market today to justify that premium and that market needs to be created to encourage investment in upstream hydrogen production capability. There is currently a trade-off between hydrogen carbon footprint and cost,” Scott said.

Platinum is used as a catalyst in fuel cells. Therefore, if FCEVs do become a key player in long-term zero carbon mobility, then demand for platinum will increase. “In current generation FCEVs, the amount of platinum used is five to six times that of a diesel catalytic converter, but the aim is to reduce the amount of platinum used when fully commercialized and there is R&D into non-noble metal catalysts,” Scott said. However, FCEVs could still offer a good opportunity for platinum producers especially considering the pessimist sentiment around long-term demand prospects of diesel engine vehicles and therefore platinum automotive catalyst demand.

The full report is available for purchase here.  For additional research and analysis on the electric vehicle and hybrid markets, visit the IHS Automotive Hybrid-EV Portal.