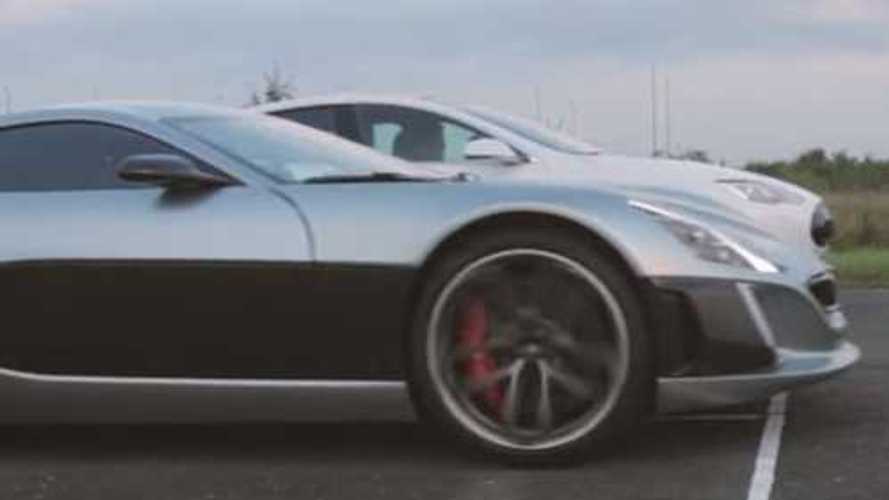 It's a track meet that has been a long time coming, and one that Archie Hamilton (Super GT driver/Super Car Review) had to go all the way to Croatia for. That country being the home to the million dollar Rimac Concept_One.

Once there, the Concept_One takes on the Tesla Model S P90D.

The result of that match seem almost pre-determined given the Rimac's other-worldly sepcs (but we won't spoil it for you anyway).

Not satisfied with pitting the 1,088HP EV against "just" the Tesla, Archie brought with him a (even more expensive) LaFerrari with him.

Extra: Mate Rimac - Founder, CEO and CTO weighs in and tells some backstory on the race and his electric supercar in a lengthy blog post on the company's site - which can also be found in its entirely below

The takeaway from the match-up?  The future of anything "super car" includes a plug.

Truly the Rimac Concept_One is a rare bird.  When the car was announced it had a planned product run of eight units.

Then the company decided the Concept_One could be improved on, and has announced the Rimac Concept_S - same basic setup, just with more more (1 Mw of power/1,018 kW and 1,800 Nm), and even better performance.

Bonus:  Here is some footage of the new Rimac testing...at one of the Croatian Ministry of Defense's military runways (...because everything else was too short for top speed testing)

Mate Rimac - Founder, CEO and CTO of Rimac Automobile backstory on the race:

I’m sure that this video will have quite an impact and that people will like to know more so I decided to give a little bit of background information about the race:

When we conceived the Concept_One, our idea was never “just” to make an electric version of a supercar. The ideas always was that an electric powertrain brings new opportunities to make supercars more exciting, controllable and ultimately – faster.

British racing driver and YouTuber Archie Hamilton wanted to find out how fast the Concept_One really is so he came to Croatia and brought with him a Tesla P90D with Ludicrous Mode and the ultimate road-going Ferrari – the LaFerrari.

While other electric cars have great performance off the line, they quickly loose their breath as speed increases. Also, most other electric cars tend to overheat after a couple of hard acceleration runs. We have three “secret weapons” to battle the Achilles' heels of electric cars when it comes to performance. Just between you and me, I’ll whisper a bit about those secrets:

1. Tons of power and torque. With four motors outputting 1.600 Nm at almost 0 speed and well over 1.000 hp, the Concept_One has enough torque and power to keep its tires busy even at high speeds.

2. Cooling. The Concept_One has seven independent cooling systems and several smaller sub-systems. We have worked really hard to maximize the performance for track use and not just for a couple of acceleration runs.

3. Gearbox. Each of the four motors is connected to an independent gearbox. While the front motors have single-ratio reduction gearboxes, each rear motor has its own two-speed dual-carbon-clutch gearbox. This helps us to have great acceleration while also having a very high top speed. Most importantly, it allows the Concept_One to accelerate very quickly even at high speeds.

First, Archie has lined-up the Concept_One against a Tesla P90D with Ludicrous mode – the word’s fastest accelerating sedan that has shown that electric cars can kick the behinds of the industry’s big guys. Being a family sedan with lots of space and in a completely different price category, this comparison isn’t really fair. But in terms of performance, the Tesla is the closes thing to the Concept_One in the electric car world. It is an impressive car and performs very well at low speeds. On a full ¼ mile, the difference between the Tesla and the Concept_One is quite large.

Fortunately, Archie brought a big gun to the track. The LaFerrari. Being a hybrid, the LaFerrari utilizes the advantages of electric motors in order to complement the naturally aspirated V12. We knew that the Concept_One was fast, but having it on the line against the mighty LaFerrari made me a bit nervous. I really didn’t know what to expect. Before Archie had an opportunity to test the Concept_One, he said: “If I had to put my money on anything, the LaFerrari has to win. It surely has to.”

Of course - how could a car form a small Croatian company, made in a country that never had a car industry, with extremely limited funding and, worst of all, without a combustion engine, beat the best thing on four street-legal-tires that ever came out of Maranello? Well, as it turns out, it can.

With the LaFerrari, Archie actually did three runs – two of which are in the video. In the second run (which is not in the video), the LaFerrari stalled during launch so Archie has decided to cut it out, as the difference was just too large. The background story is quite illustrative of some of the advantages of electric cars. The Concept_One has no special mode for maximum acceleration. It just needs to be in Race Mode and first gear. The driver just needs to floor it and the Traction Control and Torque Vectoring will do their best to translate as many free electrons as possible into pure acceleration. The Race Mode is customizable like any other mode through the Concept_One’s infotainment system and can also be used for every day driving. The only relevant parameter for acceleration is that in this mode, maximum torque on all four motors is enabled. Nothing else is specially tuned for maximum acceleration runs.

Most conventional supercars have special acceleration modes, called “Launch Control”. Those modes do quite a few things – they rev the combustion engine to the right RPM and hold it there before engaging the clutch, they shift gears at the optimum time, control wheel slip etc. Unfortunately, even with a skilled racing driver and proper pre-conditioning, it doesn’t really work every time.

Anybody can make a perfect launch in a Concept_One or in a Tesla. Just floor it. The car will do the rest. Every time. With conventional cars, it doesn’t really work like that. It takes several attempts to make a right launch.

The track was booked for the morning only so the runs were recorded between 5 and 6 a.m. The conditions haven’t been great as the track was quite cold and as this runway is not being used for a long time, the surface is in a bad condition and quite dirty. Still, the Concept_One achieved 2,69 seconds to 100 km/h and 9,92 seconds on the quarter mile. When compared to real-world tests of the “Holy Trinity” (LaFerrari, Porsche 918 and McLaren P1), that seems pretty competitive. The data is quite interesting so when I catch a bit of time, I will make a detailed analysis of the acceleration runs and post speed, g-force, power and energy consumption diagrams for fellow EV fans to geek-out. Still, there is a lot of room for improvement.

The particular Concept_One in the video is a customer car that has been delivered to the US after the video was recorded. That doesn’t mean that we have stopped to improve the Concept_One. As you can imagine, it has lots of electronics and software that can be updated wirelessly even when the car is in the customer’s driveway on another continent. Some of the things we’re working on to make it even faster:

1. Traction Control – our powertrain architecture gives us the opportunity to control each wheel extremely precisely. While traction control traditionally should keep the wheels from slipping, a small and very controlled amount of slip can be beneficiary for acceleration. When excessive slip is detected, it is important to cut the torque on that particular wheel just enough to restore traction while keeping the car stable, which is challenging with a car that can keep all four tires on the limit at quite a high speed, without any mechanical connection between the tires to keep them at the same speed. We are constantly improving our strategies and algorithms to get the best results but we still have lots of ideas that we want to implement to optimize the Traction Control and Torque Vectoring algorithms.

2. More power is always a good thing. Let me just say that our powertrain has potential for a bit more of it.

3. Shifting – even while the Concept_One is shifting, power delivery is never interrupted since the front motors still deliver torque to the front wheels independently. In order to reduce shifting time and remove any driveline stress, we are synchronizing the motor speed to the target speed for the next gear – accelerating the motor on downshifts or slowing it down (in generator mode - using the rotor’s inertia to feed the energy back into the battery) for upshifts. The whole process takes just 150 milliseconds but there is potential to further accelerate this. As the Concept_One has enough torque to outpefrom almost any car from a standing start even in second gear, there is no need for shifting in real life so gear shifting times are not really relevant for normal road driving. They do count in situations like this.

4. Tires – while the Pirelli P Zero tires have incredible performance, they are our tire of choice because they are real street tires – usable on the road in all conditions and by average drivers. High performance-tires such as the P Zero Corsa offer even higher performance. Other supercar manufacturers deliver their cars with such high-performance oriented tires from the factory. We will be offering that option to our customers soon. With more performance-oriented tires, the Concept_One would be able to put more power down and accelerate even faster.

As you can see in the video, the Concept_One is already pretty fast. But we’re working hard to make it even faster. Of course, this is not the only thing we’re doing. Not by a long shot.

While the straight-line performance is quite impressive, our main focus while developing the Concept_One was on lateral performance. High-speed corners and racetracks are the real playground for the Rimac All Wheel Torque Vectoring System and the Concept_One. Hopefully we’ll have an opportunity to show how the car performs against other supercars in those conditions as well soon.

I would like to use this opportunity to thank the owner for letting us use his car for this video. It is incredible how supportive our customers are. Thank you so much!