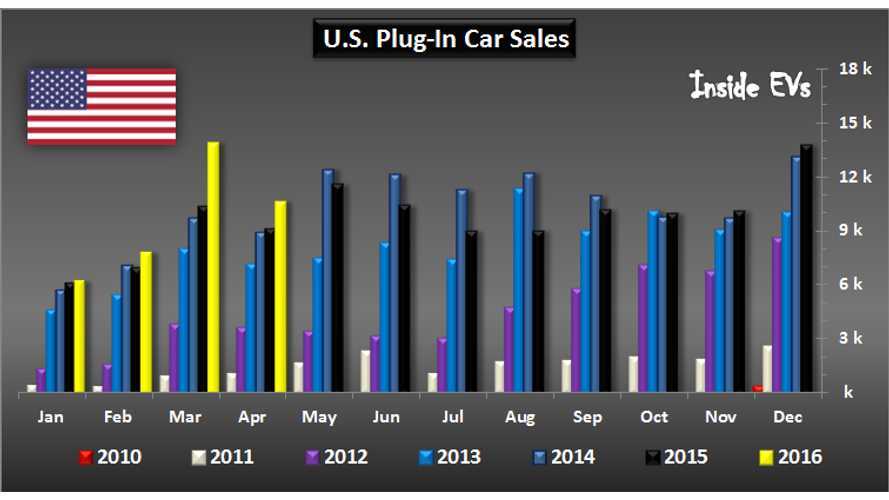 April plug-in vehicle sales in the US didn't disappointed (full details) and once again set a new monthly sales record of 10,586 EVs sold (according to InsideEVs data and estimations), which is 16.4% more than year ago.

U.S. is now on the path of strong growth, as April logged the 6th month in a row of record deliveries.

The top selling model in April was the Chevrolet Volt, which at 1,983 sold, improved by 119% year-over-year.  In two recent months, more than 1 out of every 100 Chevrolet vehicles sold were Volts.

April Volt sales also decreased the distance to the Tesla Model S in the YTD standings (-1,220 units), as the end of the quarter and a model refresh (details) saw Tesla slow the pace of production.  This is likely as close as the Volt will get to the Model S this year, as Tesla projects to have a strong selling month in May, and potentially a record month in June, as the company looks to make up for lost time in April.

The Chevrolet Volt is also in a good position to be the first model in the US to cross the 100,000 plateau - currently standing at 94,720.

The Nissan LEAF on the other hand, slipped out of the top three best selling plug-ins year to date, as April sales were down year-over-year for the 16 consecutive month.

Faced with a lot of other plug-in options (and a couple future ones - namely the Model 3 and Bolt EV), the American consumer has certainly spoken...and it wants a new, longer range LEAF.  Yesterday.

Just 787 LEAFs were delivered last month (down -49%), which translated to the lowest share of overall Nissan car sales in the last three years - 1.2% (or more if we include trucks).

Nissan LEAF sales in U.S. - See if you can spot where the US consumer lost interest!  (data through April 2016)

Big positives came from the Ford Fusion Energi in April, as 1,331 deliveries represented growth of 87% year-over year, and a multi-year high.

The Fusion Energi is now also the 3rd best selling plug-in car for 2016 in the US, and the plug-in hybrid version takes the second highest 6.4% share in total Ford Fusion sales to date.