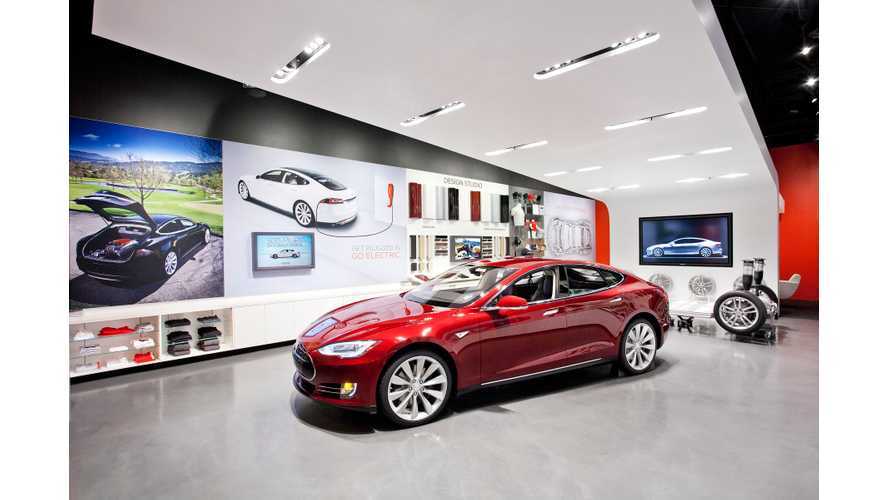 Despite the fact that it is illegal for Tesla to sell its cars in Michigan, the company is showing its commitment to the cause, and has opened a gallery in the state. Detroit is the nation's hub for the Big Three automakers, and of the three, GM has been duking it out and making it increasingly difficult for Tesla for some time. Of all of the states that are challenging Tesla's sales methods, Michigan is by far the biggest roadblock.

Tesla has about 100 Stores and Galleries Throughout the U.S., over one-quarter of which are in California.

Tesla opened the new gallery in Troy, Michigan, a wealthy area north of Detroit. The 700-square-foot gallery is located inside of a Nordstrom store at the upscale Somerset Collection shopping mall.

This is not the first time that Tesla has worked with Nordstrom. Since June, three Nordstrom stores have adopted Tesla showrooms. The showroom will have Model S and Model X vehicles available for viewing, and personnel on hand to educate consumers. Eventually, it will showcase the Model 3. Hopefully, if Tesla makes any ground on the right to sell, by the time the Model 3 is actually available to the general public, the gallery will be able to facilitate Model 3 sales.

Tesla didn't give any advance indication that the store was arriving. The company doesn't advertise. Instead, Tesla waited until the busiest shopping time of the year and essentially "showed up" in the mall. Nothing like a bit of surprise controversy to get all of the dealership gurus and union members in a frenzy.

Tesla is surely active in Michigan. The company purchased one of its suppliers, Grand Rapid, Michigan-based Riviera Tool, along with its 100 employees. The company renamed it Tesla Tool & Die. Tesla also works with several other suppliers in Michigan, so it's not as if the company isn't supportive.

Tesla is allowed to show the vehicles and discuss them with people. This is critical for the company, since it doesn't advertise in the traditional sense. Also important is that interested buyers understand all-electric technology, charging, Autopilot, and autonomous driving. However, the representatives can't talk about the price of the vehicles or offer test drives. They can simply direct consumers to the company's website or to the nearest "out of state" dealers.

Tesla currently can't sell its cars in multiple U.S. states, simply due to the fact that it uses direct sales and isn't willing to follow the traditional dealership model. Tesla doesn't plan to use a "middle man." Tesla has tried to open its own, company-owned and managed independent "dealership" in Michigan, but was denied. In fact, Michigan is one of the only states that has gone so far as changing legislation to further assure that Tesla will have no ground to stand on. After repeated attempts to solve the problems, Tesla has filed a lawsuit against the state.