Every Statistic. Every Price. For Every Plug-In Sold In The US. 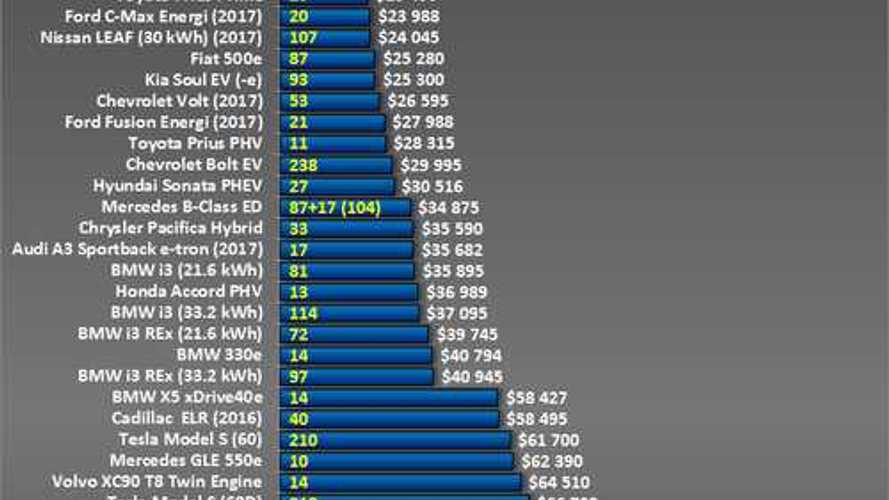 As we are in the midst of the hottest selling month of the year for EVs - the US plug-in vehicle segment is flush with new models, as well incentive to buy (via the end-of-season federal tax credit rush)  So, we figured this was a good time to check out what was available on the market today via the (exceedingly long) graphic above.

Feel free to print yourself off a copy and use as a handy reference for buying that special someone (or yourself) a new EV for the Holiday Season.

BMW introduced a longer-range 33 kWh (114 mile) i3 this Fall. Nissan switched the LEAF to only a 30 kWh offering (at least for now) - starting for ~3,500 less, while Ford upgraded the Focus Electric to 33.5 kWh and 115 miles - while leaving the pricing virtually unchanged.

Hyundai is preparing to launch IONIQ Electric in a few weeks with pretty nice range of 124 miles on just 28 kWh pack, although pricing is unknown.

Tesla made has also made several moves here on both performance, equipment and prices.

There several new models with hopes to sell in high volume.

The Toyota Prius Prime got back in the game in mid-November, and sold like it had never left, despite a previous generation Prius PHV that went of of production ages ago (~18 months).

Chrysler is also entering the plug-in segment for the first time...and refreshing didn't off a compact car, as the plug-in Pacifica Hybrid minivan, with 33 miles of all-electric range (details), is a welcome addition to the pack - especially as it is priced right from $41,995 (+DST).

We should also note the more attractive pricing of Ford C-MAX Energi at some ~$4,650 less in 2017 (from $27,120 MSRP) and new premium/high-end enteries soon to arrive - the Karma Revero, BMW 530e, Porsche Panamera 4 e-Hybrid, and Cadillac CT6 PHEV all arriving in the Spring