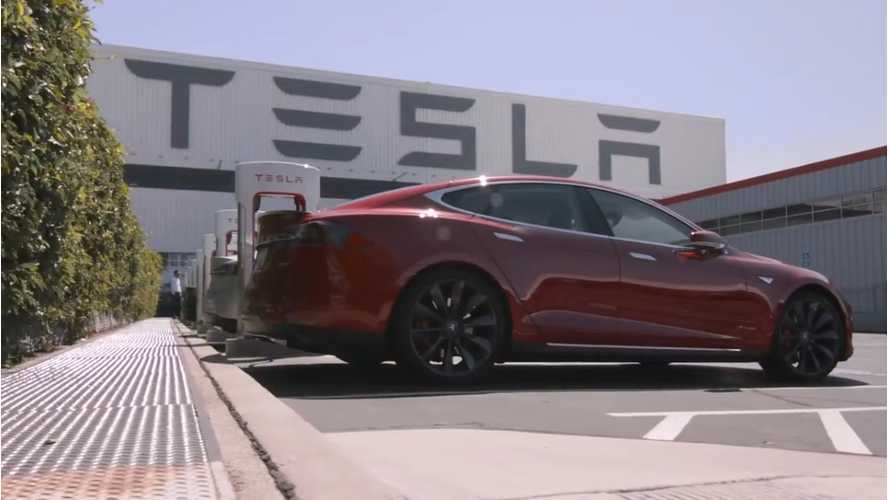 After the bell on Wednesday night, Tesla Motors reported first quarter earnings and offered guidance on future production and sales targets at the company.

Given The Strong Mix Of P90D Model X Deliveries, The Average X Transaction Was 30% Higher Than That Of The Model S

For the first 3 months of the year, Tesla reported a loss of 57 cents per share, 3 cents better than the street had been expecting.  Revenue came in at $1.6 billion, roughly in line with then 1.61 billion estimated.

For the quarter Tesla said it made deliveries of 14,810 Model S and X vehicles, a re-iteration of the sales miss it disclosed last month thanks to "hubris".

"During the quarter, we delivered 14,810 vehicles, almost the same as what we estimated in our April announcement. Model S average prices improved 1.4% sequentially, as price increases and higher option take rates offset a slight mix shift to less expensive Model S variants. Average Q1 Model X prices were about 30% higher than for Model S."

Given Model 3 demand, the company said it would pull forward plans to hit the 500,000 EV produced milestone (from conference call: rough estimate of 300k-400k of which being made up of Model 3s), but that it would likely require more cash to do so:

"Additionally, given the demand for Model 3, we have decided to advance our 500,000 total unit build plan (combined for Model S, Model X, and Model 3) to 2018, two years earlier than previously planned. Increasing production five fold over the next two years will be challenging and will likely require some additional capital, but this is our goal and we will be working hard to achieve it."

From Conference call: 500k target bump is in reaction to Model 3 demand, Musk says the company is  “hell bent on becoming the best manufacturer on earth.”  Musk also says his desk is the end of the production line, and that he has a "sleeping bag nearby" in his office that he makes use of often.

For Q2 the company pointed to a lot of inventory/deliveries headed to Europe slowing results, but that it expected to still deliver some ~17,000 vehicles, while producing ~20,000.

As for production going forward, Tesla sales by the end of Q2, a level of 2,000 vehicles per week will be met, and that will "lay the foundation for a strong Q3 delivery number".

Tesla took the time to point out that 325,000 reservations were made over the first week (~400,000 today) without the help of any advertisement or paid endorsement.

"This implies about $14 billion in future sales, making the Model 3 introduction the biggest consumer product launch ever"

From Conference call: Tesla CEO says the company is learning from Model X, with a focus on "more simplicity on the Model 3."  Future Model S elements are only approved if they are also easy to manufacture, and the failure/manufacturing risk is low.

Tesla is also telling suppliers they have to be ready to go by July 1st, 2017 - Musk stresses this is not start of production (or an "impossible date" to start production), but rather an on hand date for all components/parts needed to start the build - in relation to those parts needed, Model 3 design is almost complete.   Musk states that Tesla goal is to build at least 100,000 Model 3s before end of 2017.

Of the Model 3 reservations to date, 93% of the consumers had never "interacted"  with Tesla before.  Tesla also noted no adverse affect on the Model S as a result.

While the Gigafactory today is operational assembling packs for products such as Tesla Energy's Powerwall, actual production has yet to commence, but Tesla reports it will soon-ish.

"We remain on plan to make the first cells at the Gigafactory in Q4 2016, and we are adjusting our plans there to accommodate our revised build plan. "

While we knew Tesla would have to touch on Q1 demand for the S and X, we also knew they could not resist teasing about the early Q2 demand profile either:

...Notably, this demand level was reached ahead of the Model S refresh, before Model X could be seen in stores, and prior to the unveiling of Model 3, which we believe is stimulating demand for all of our vehicles."

From the conference call:  Elon Musk says that Tesla just had its first "flawless production" of a Model X run off the Fremont line; in other words, a perfect score coming out of the "second layer" of QC, and pre-delivery inspection.

Tesla Supercharging Footprint Is Expanding Rapidly In Anticipation Of Almost 400,000 New Tesla Arriving Over The Next ~3 Years

Tesla said it planned on adding 70 new retail stores and service locations in 2016 - bring the net total to over 300.

*-Cash and cash equivalents rose to $1.44 billion - "aided by more effective cash management and $430 million drawn against our asset based credit line" - Tesla noted that $350 million was paid back in early April thanks to Model 3 deposits.

"Our GAAP cash outflow from operations during the quarter was $250 million. After adding $242 million of cash inflows from vehicle sales to our bank leasing partners, our cash flow from core operations was nearly breakeven"

"Overall, our non-GAAP Automotive gross margin declined 90 basis points over Q4 due to an increase in delivery mix of Model X, which carries a lower margin during its ongoing production ramp phase."

"Looking out beyond Q2, we remain confident that we can deliver 80,000 to 90,000 new Model S and Model X vehicles in 2016. This is due to the growing demand we are seeing for Model S and Model X, the improved rate of production that we project for Q2, and the production increases planned for the back half of 2016.

"Given our plans to advance our 500,000 total unit build plan, essentially doubling the prior growth plan, we are re-evaluating our level of capital expenditures, but expect it will be about 50% higher than our previous guidance of $1.5 billion for 2016. Naturally, this will impact our ability to be net cash flow positive for the year, but given the demand for Model 3, investing to meet that demand is the best long-term decision for Tesla."

The stock initially traded up about $7 (3%) following the news in extended trading after the completion of Tesla's conference call, but opened Thursday lower by about $10 (4%) as analysts have an adverse reaction (disbelief) to Musk's optimistic Model 3 production plans for 2017 (real time quote here)