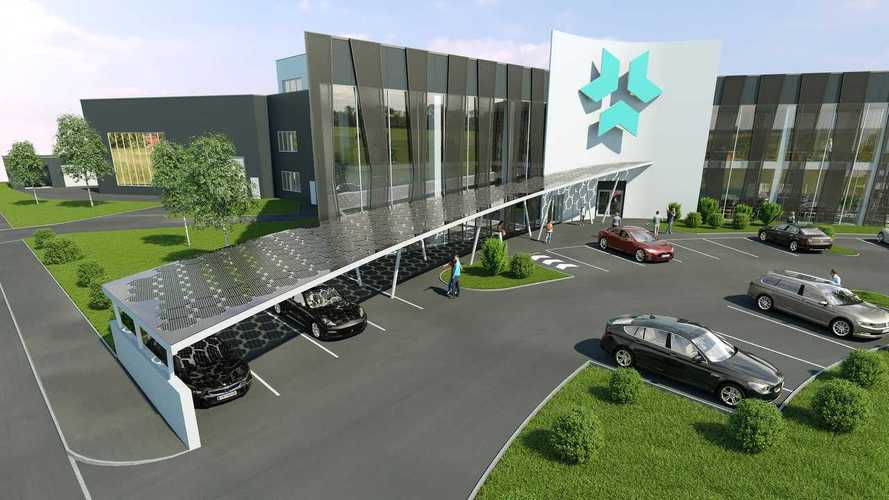 Batteries are to be produced for both electric vehicles and energy storage systems, with an annual output of 800,000 kWh.

Production launch is expected in March 2017.

Kreisel Electric expects that the fully automated production line, at the 6,276 square meters of building, will be supported by 70 new jobs.

The company also boasts of the highest energy density and long lasting battery packs on the market:

Until its opening in March 2017 up to 70 jobs will be established. The highly innovative battery technology by Kreisel has already impressively proven its performance ability many times. The company also realizes complex projects, including the development of power trains, charging technology and software in collaboration with its industrial partners.

Due to the particular assembling of the batteries and the innovative thermal management the current product generation features an advantage of 20 percent more usable capacity available in comparison to the products of the main competitor. With a weight of only 4.1 kilograms (resp. 9 pounds) and the tiny volume of 1950 cm3 (resp. 0.43 gallons) the Kreisel battery reaches a capacity of 1 kilowatt hour – an outstanding power density in comparison with competitors. In assembly with an electric car the guaranteed service life of the currently lightest battery on the market is 400,000 kilometres (approx. 248,500 miles).

In its first expansion stage, the factory, which is due to open in March 2017 in Rainbach, Austria, can produce batteries with a capacity of 800,000 kilowatt hours per year. Due to the highly automated manufacturing process the serial assembly of the battery technology is particularly fast (15 seconds for each kilowatt hour) and thus very economic. Within a quarter a duplication of the production capacity is feasible.

Prospectively the three equally sized parts of the building will be used for battery production, as well as for technical development of prototypes and small batch productions. The last section of the building will host the software and engineering development and the offices. The roof of the factory will be equipped with a photovoltaic system with a 200 kilowatt peak output. The generated solar power will be stored in stationary Kreisel batteries (of 1,000 kilowatt hours) to secure the continuous power supply for building and charging stations. The heat supply is ensured by using the waste heat from the manufacturing machines together with thermal heat pumps.

Kreisel as a battery technology producer

With this innovative battery technology Kreisel Electric positions itself as one of the few European manufacturers for mobile and stationary energy storages. Also by the successful implementation in retrofitted vehicles, formerly powered by a combustion engine, Kreisel Electric proved the outstanding product properties regarding power density, compact construction, short charging times, high level of safety (liquid cooling) and the high guaranteed service life.

Amongst these individually converted vehicles are a Porsche Panamera with a total electric (operating) range of 450 kilometres (resp. 280 miles) without speed reduction (up to 300 km/ h resp. 186 mph), a Skoda Yeti and a Mercedes-Benz Sprinter. Besides that Kreisel cooperates with manufacturers, fleet operators, as well as with cab and transport companies. The result is either the production of a custom-made small-scale series with up to 500 vehicles or Kreisel supports the company in establishing and operating a licenced production of its battery technology.

Another highlight is the implementation of a Kreisel battery in the e-Golf by VW: the high- voltage battery is mounted between the axles and currently features a capacity of 24.2 kilowatt hours at a weight of 330 kilograms (approx. 730 pounds). The installation of the Kreisel battery pack enables a higher capacity of 55.7 kilowatt hours, while the required installation space and the weight remain identical. Thus the e-cars driving range in accordance with the New European Driving Cycle (NEDC) improves from 190 to over 430 kilometres (resp. from 120 to 267 miles)."