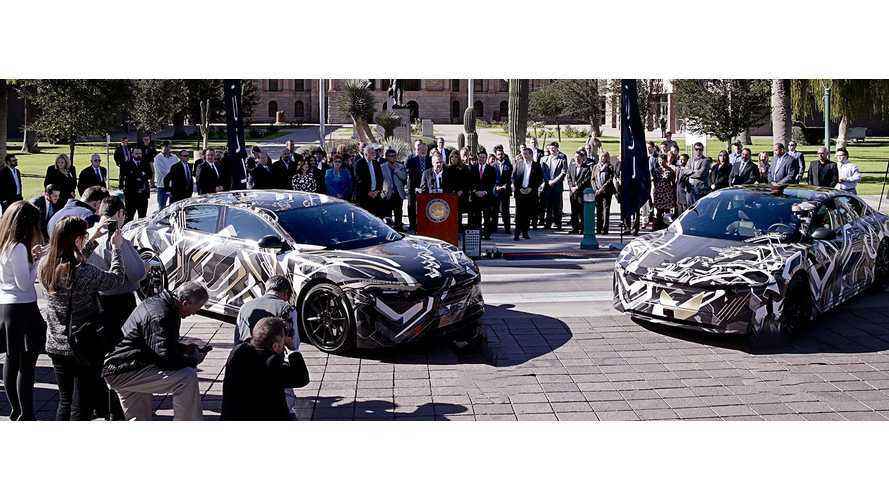 Lucid Motors, which is gearing up to unveil its first electric model, announced its selection of Casa Grande, Arizona as the site for its first EV factory.

Lucid Motors' production-intent models are set to debut in January, while two alpha prototypes were presented Tuesday during the Arizona plant announcement.

Ground breaking will begin in the first half of 2017, while production itself is said to start in 2018, with a plan to have 2,000 full-time employees working on site by 2022.

From the company's live presentation (not embedable...but can be viewed here) at the 24:20 mark Lucid Motors's CTO Peter Rawlinson (and former Tesla VP) encourages us that company is on track to re-imagine and redesign the car.

Lucid's upcoming car is said to be an all-electric vehicle with power and range to spare: up to 1,000 hp and an optional 400 miles of range.

Lucid Motors announces Casa Grande, Arizona, as the location of its new factory

Today, Lucid Motors announced Casa Grande, Arizona, as the location for our cutting-edge automotive factory. The announcement was made at two events, one at the Arizona State Capitol in Phoenix, and another at Casa Grande City Hall.

The site selection process began over a year ago, with our team evaluating over 60 potential sites in 13 states throughout the United States. In the end, we chose Arizona and Casa Grande for their pro-business mindset, excellent workforce, forward-thinking academic institutions, proximity to our Silicon Valley headquarters, strong regional supply chain, and availability of a suitable property.

We are excited to be joining the Phoenix metropolitan area community, which Fortune Magazine recently declared the hottest location for automotive technology. We worked in the spirit of collaboration and understanding with many state and local officials to bring this plan together. Those whose support was vital include Arizona Governor Doug Ducey, the Arizona Commerce Authority President and CEO Sandra Watson, US Senators Jeff Flake and John McCain, City of Casa Grande Mayor Bob Jackson, Casa Grande City Manager Larry Rains, Pinal County Supervisor Todd House, and Pinal County Manager Greg Stanley.

The Lucid factory program will be overseen by Brian Barron, Lucid’s Director of Manufacturing. Brian is an 18-year veteran of BMW, where he ensured the timely launches of various BMW model lines and managed functional areas in both South Carolina and Germany.

We plan to break ground and begin hiring in the first half of 2017. In 2018, we will begin production of our first model. By 2022, we anticipate having over 2,000 full-time employees working on site.

Lucid is creating a vehicle to lead a new era of luxury mobility. A vehicle that redefines the automotive experience for both driver and passenger. A vehicle that encapsulates the passion and ingenuity of our experienced team. In the state of Arizona, Pinal County, and the city of Casa Grande, we believe we have found the right partners to realize this vision."