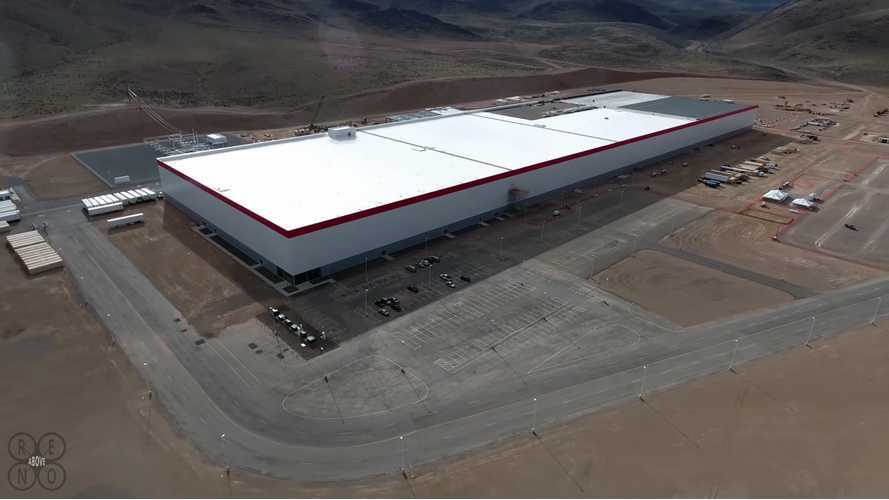 KQED Science had an opportunity to interview J.B. Straubel, Tesla co-founder and Chief Technical Officer, about details regarding the $5 billion Tesla Gigafactory. The upcoming world's largest battery factory still maintains many mysteries. Tesla has been working on it for nearly two years and it may be another four years before it's completed.

The factory is located in the Nevada desert, about a half hour from Reno. Straubel took KQED up on the roof of the factory to get a sense of its enormity. It will cover 5.8 million square feet of land and eventually be connected by rail to Tesla's Fremont assembly plant. He said:

“It’s really hard to get a sense of scale. I mean, it’s huge. I’m not a huge football fan but I think it’s on the order of around a hundred football fields."

Tesla is already utilizing completed sections of the building. As each section is finished, battery production starts immediately. Nevada offered Tesla an incentive package of over a billion dollars toward the factory. The offer came with specifics that the company must follow. Most importantly, employing Nevada citizens as 6,000 of the factory's permanent workers.

The Tesla Gigafactory will run on renewable energy, mostly from solar panels on the roof. Energy will also come from batteries and other off-site renewable sources. The goal is to double the world's lithium-ion battery production, and to significantly reduce costs, in partnership with Panasonic. This would supply 500,000 Tesla vehicles.

Straubel compared a room inside of the factory to a "giant baking oven", with endless rooms after rooms of specialized machines being run by many workers. He explained the "baking" room:

“So this is a pretty exciting room. It’s filled with huge metal tanks, almost like an insanely-large industrial kitchen. This is where we will actually mix the materials, the raw materials, we mix them into what’s called a slurry.”

Another room is focused on making the Powerwall. This is a 4 foot by 3 foot battery for the home. There are already many stacks of these completed and ready to ship. The Powerwall will store home owner's excess solar energy that can be used overnight.

Powerpacks, like Powerwalls, are also accumulating on the factory floor. These are a bigger version of a Powerwall, said to be about the size of a refrigerator, that will be used in factories, industrial sites, and electric utility grids.

Tesla sees the future of sustainable energy dominated by electric cars paired with solar home energy and home energy storage. Straubel is excited about the prospects. He commented:

Many see this as a huge risk to take with the future being unknown. While industry experts and futurists see the truth and advantages of the concept, consumers must see its benefits and buy into it. Energy economist from UC Berkeley, Severin Borenstein, questioned:

“Is Elon Musk far-seeing and investing in the future? Or is he making big bets that could all collapse at once?

Gas prices have been low as of late. Electric rates in many states are low enough that spending $3,000 on a Powerwall to store energy may not yet generate substantial savings. Without solar energy in place on any notable level, most consumers aren't in a position to reap the benefits. At this point, most solar customers are given incentives from power companies for the excess energy that goes back to the grid. Thus, storing the extra energy at their homes may deter them financially. Borenstein added:

“If we could figure out a way to produce batteries at large-scale and low-cost, it would really be a game changer for reducing greenhouse gas emissions . . .  people who like that and feel good about it and they’re mostly pretty darn rich . . . Average households are not going to get much or any value from these batteries."

Despite any speculation or analyst predictions, Tesla is headstrong and well underway in making all of this a reality. Once the monumental accomplishment of the Tesla Gigafactory is complete and fully efficient, battery prices will drop substantially. Straubel estimates a 30% reduction initially. Tesla hopes that lower battery prices, leading to cheaper electric vehicles, home batteries and energy storage, will eventually appeal to the masses. This will not only lead to an "electric revolution", but also provide Tesla with much anticipated profitability.