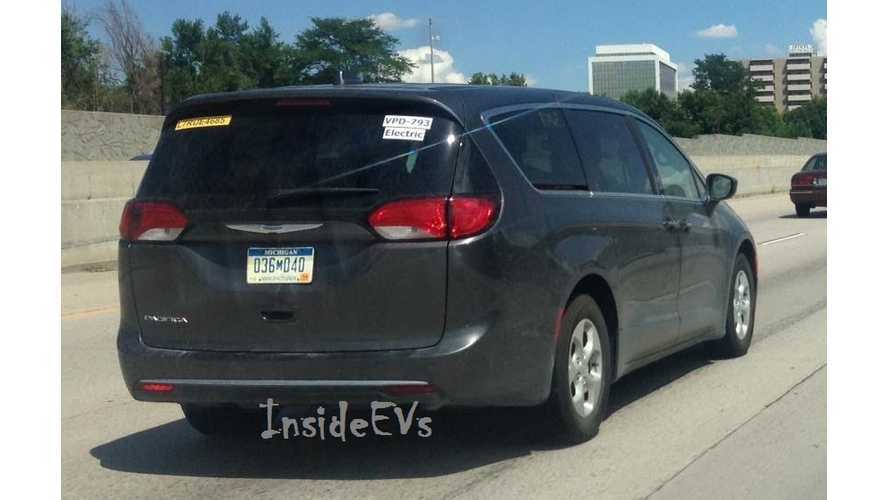 Chrysler debuted the Pacifica Hybrid minvan this year at NAIAS 2016 (or Detroit Auto Show if you will), stating the plug-in would arrive in the second half of 2016.

Then they said nothing.

Reid Bigland, President and CEO, FCA Canada, brings the Pacifica Hybrid out of hiding to accept $85.8 million in funding from Kathleen Wynne, Premier of Ontario, at the FCA Windsor Assembly Plant where it will be built

Sure there was a story shortly thereafter related via LG Chem, on the battery maker getting the contract to build Pacifica Hybrid batteries in its Holland, Michigan plant in February.

And the company also had to resurface in June to accept a $85.8 million in Canadian dollars ($65M USD) for the funding of the production facility in Windsor, Ontario.  But other than that, it has been all quiet.

So by way of a PSA (public service announcement), we bring you visual proof that the 30 mile extended range minivan is still on its way, as Gabe Caunt (via Doug B) sent us exclusive photographic evidence of an actual Pacifica Hybrid out testing on public roads.

Seen (above) in all black - which science (and common sense) tells us is the best color for any EV, the Pacifica Hybrid pre-production vehicle was sporting Michigan manufacturing plates; although apparently it must have been on a long-distance test, as it was 1,200 miles away from home in Denver.

As for the second half of 2016 release date, given what we know of the production schedules at Chrysler's WAP facility (Windsor Assembly Plant), look for the Pacifica Hybrid no sooner than November.

Some more info on the 2017 Chrysler Pacifica hybrid: