Refreshed 2018 BMW i8 To Get Increased Electric Range & More Power 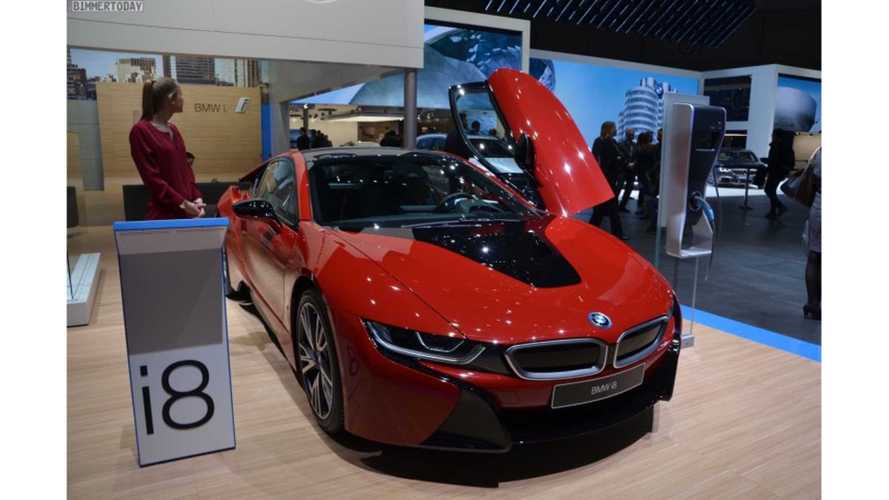 For Model year 2018, BMW is expected to release a refreshed version of its i8.

The facelifted i8 will reportedly have additional electric-only range and more total horsepower.

"BMW is set to give the i8 more power, an extended range, various chassis tweaks, an inductive charging option and a series of new lightweight components. The changes are part of a comprehensive midlife facelift for the high-tech 2+2..."

"It’s set to adopt an upgraded petrolelectric powertrain currently being tested in a fleet of roadgoing prototypes as well as the latest iteration of the i8-based safety car seen at Formula E events around the globe."

Autocar claims that it obtained some of this information from "high-level engineers at BMW’s research and development facility." These sources have confirmed the following:

"...the revised hybrid powertrain will have a more powerful electric motor than the 129bhp unit used by the existing i8."

"In combination with a lightly fettled 1.5-litre three-cylinder turbo petrol engine, the frontmounted synchronous electric motor is claimed to provide the facelifted i8 with more than a 10% boost in power over today’s model, lifting the futuristically styled coupé’s output to around 420bhp."

That's the power side of the equation, but there's work being done on the battery too. The 2018 i8 will get a revised pack with cells that have much improved energy density (such as is found in the new longer range BMW i3 that arrives this summer using Samsung SDI's 94Ah cells)  .

"...the facelifted i8 is also in line to receive a number of chassis modifications. Nothing has been confirmed, but the two i8 safety cars at Formula E events have modified upper wishbones and mounting points, together with revised spring and dampers, a 15mm lower ride height than the production car and 20in alloy wheels shod with 245/35 front and 285/30 rear Michelin Pilot Super Sport tyres."

Inductive, wireless charging is also expected to be available as an option on the updated i8.

Lastly, we expect too see the topless roadster version of the i8 make it into production shortly after the freshened standard i8 model makes is grand showroom debut.